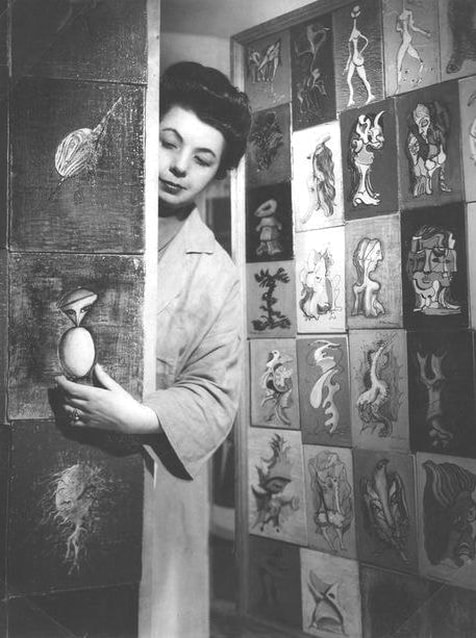 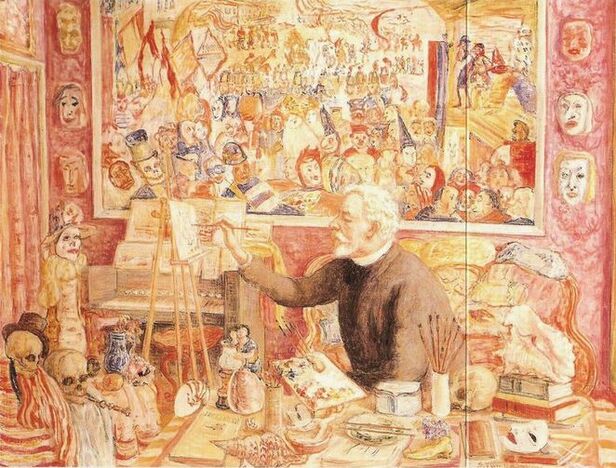 "Portrait of James Ensor in his Ostend atelier" 1925, oil on panel, 90 x 120 cm
Suzanne painted this portrait at the age of 24.
​Private collection 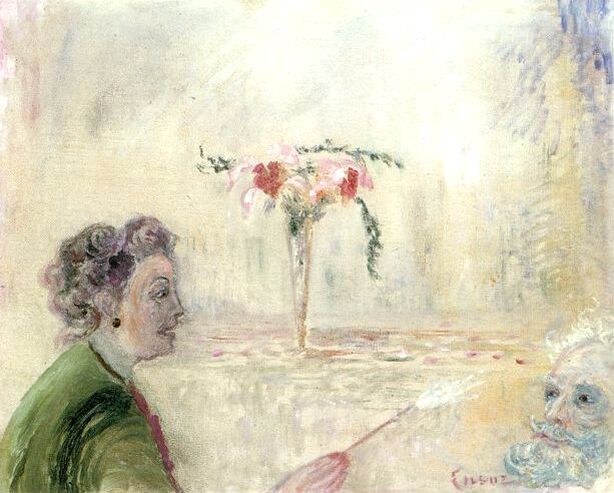 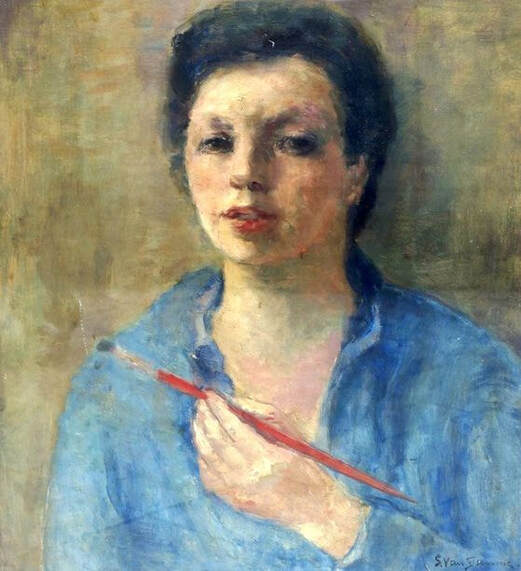 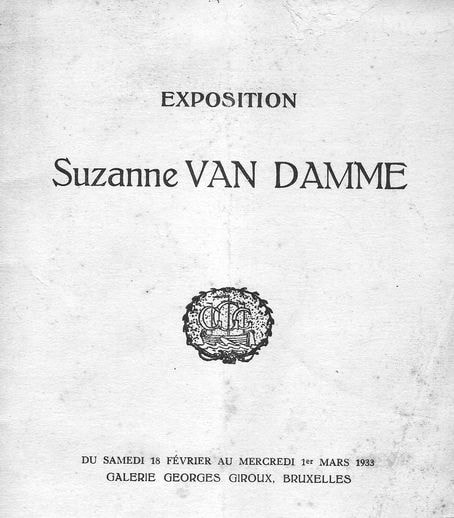 Invitation card of an exhibition at Galerie Georges Giroux Brussels, 1933 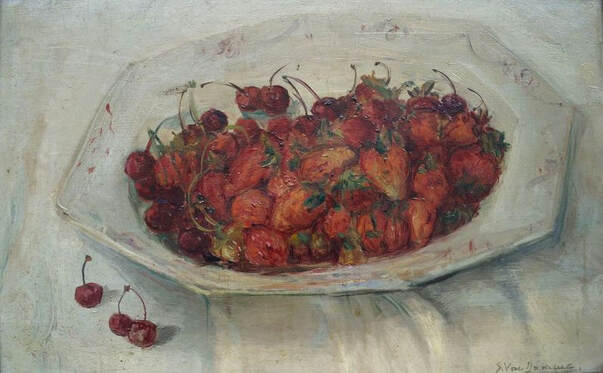 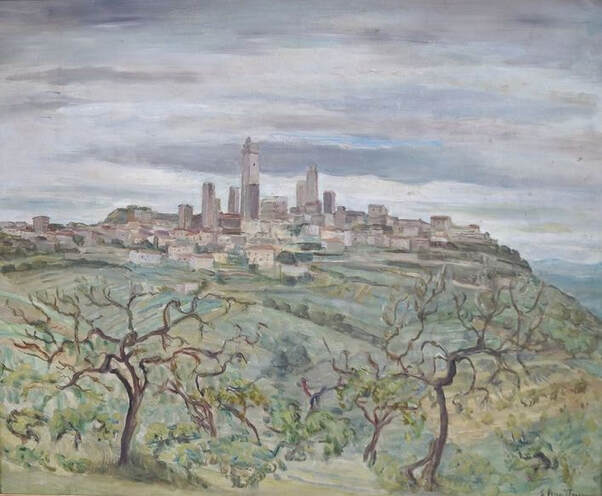 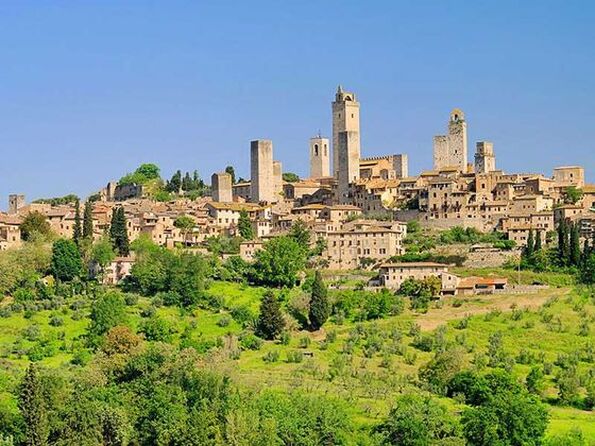 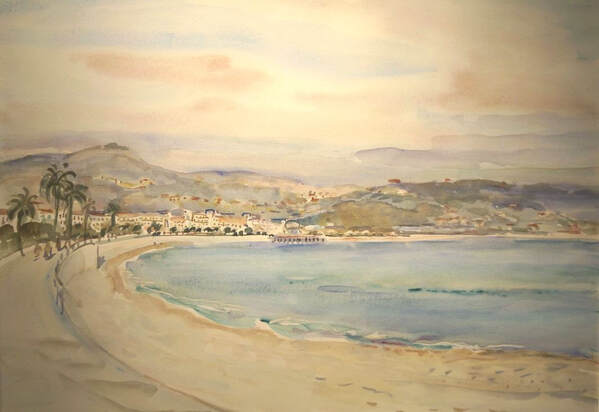 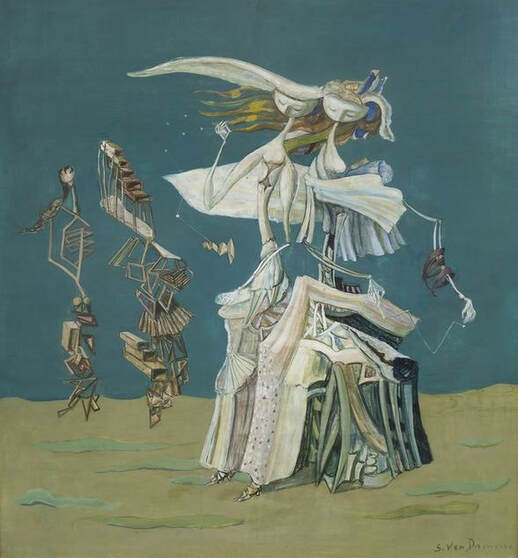 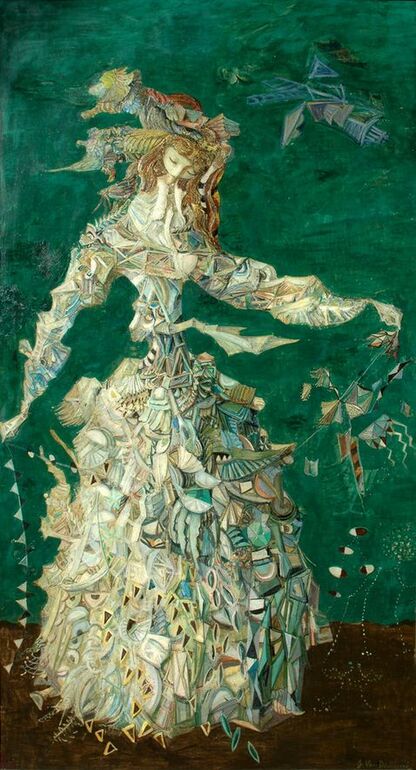 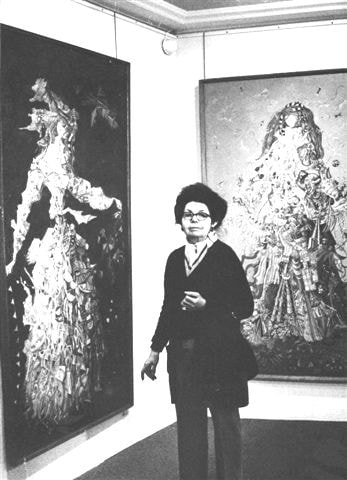 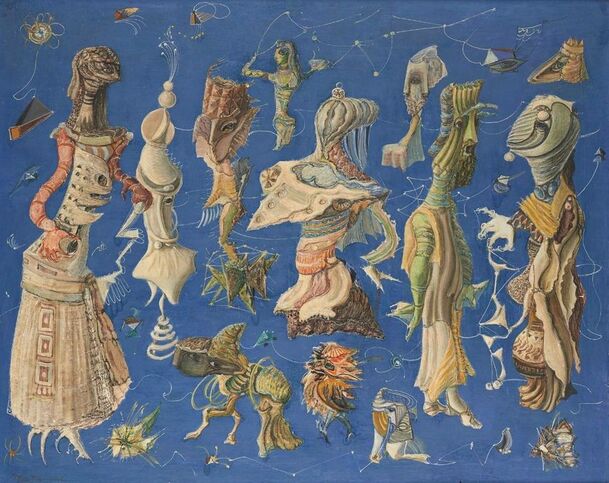 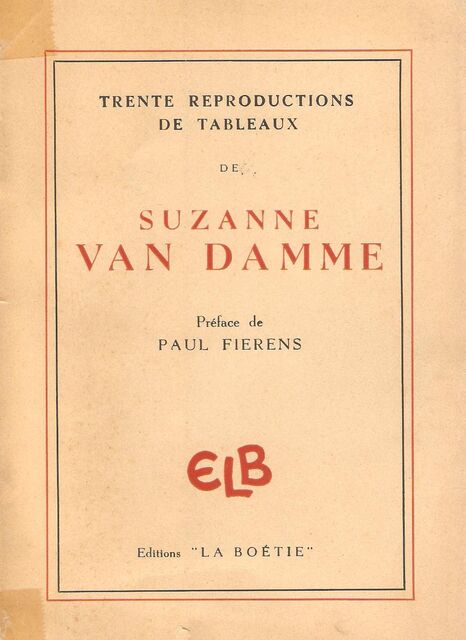 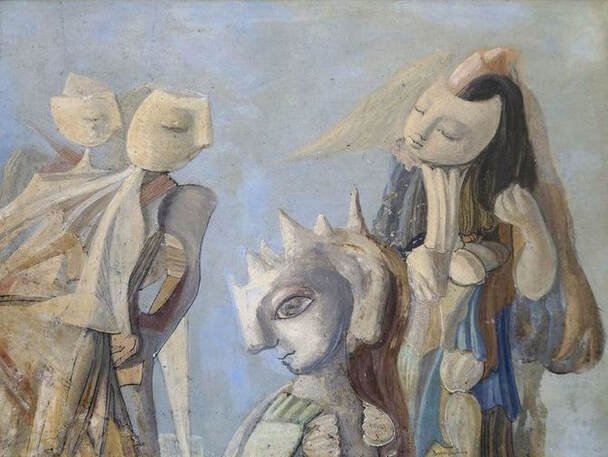 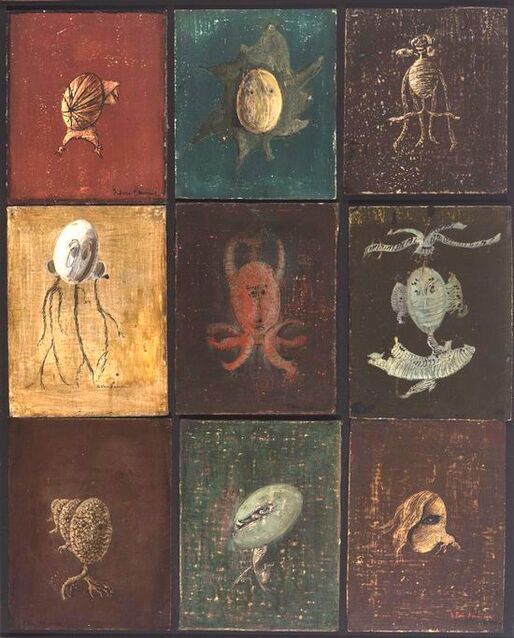 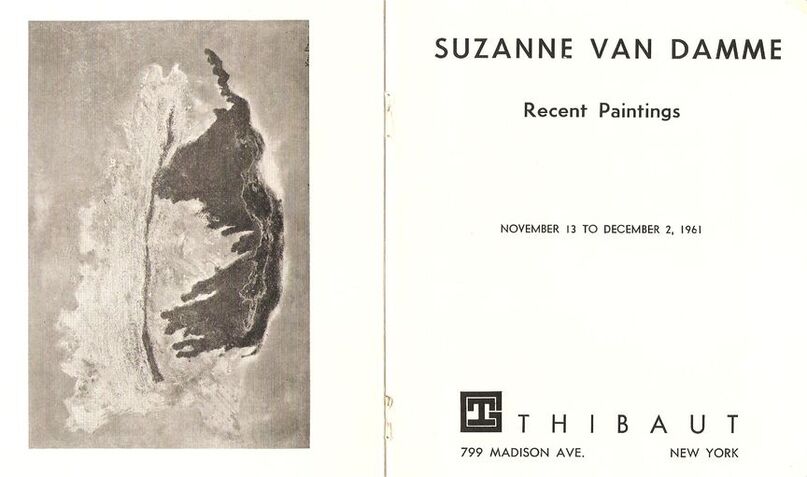 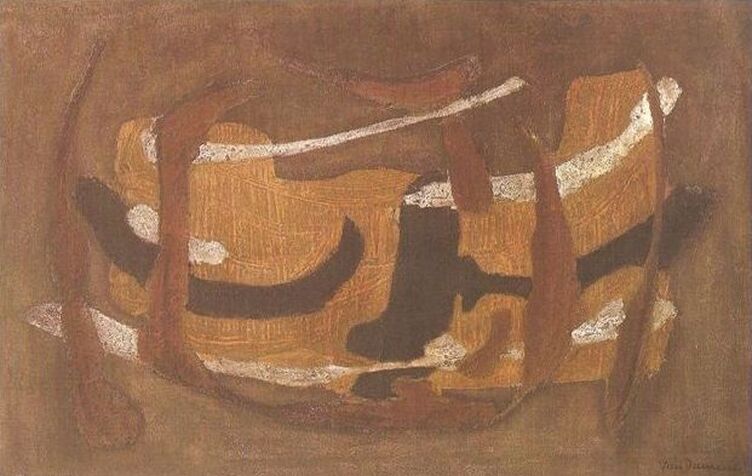 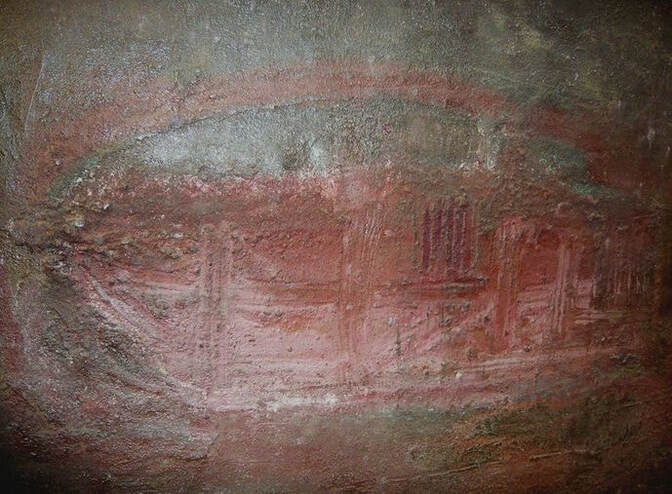 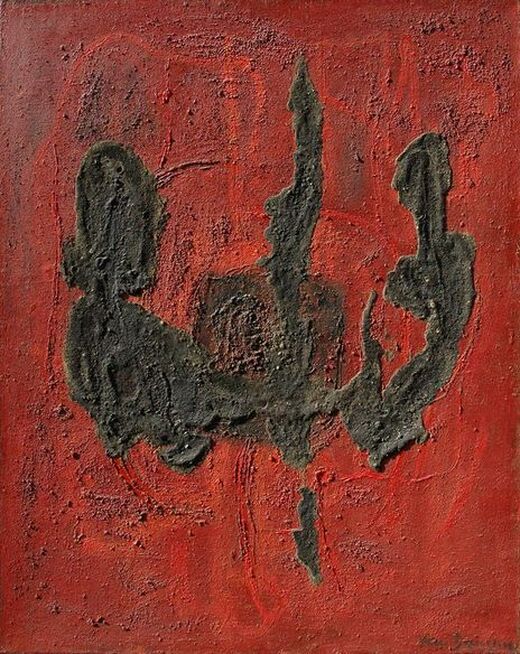 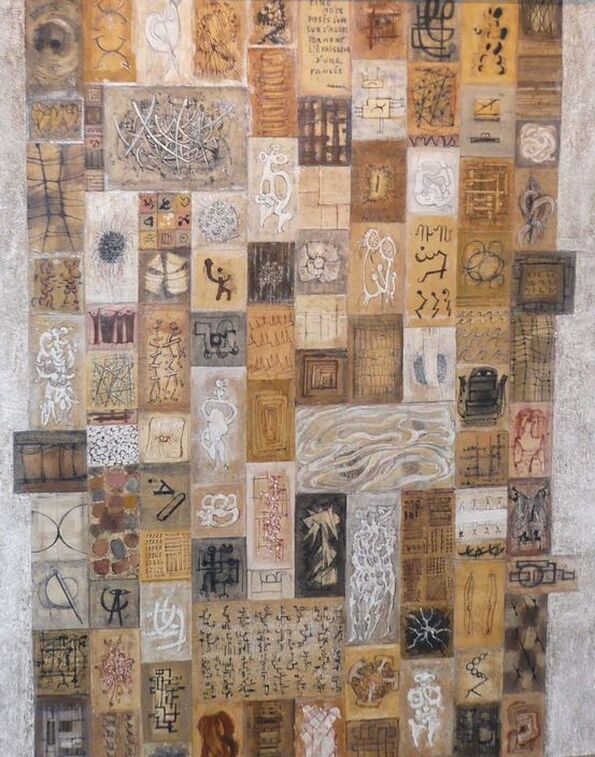 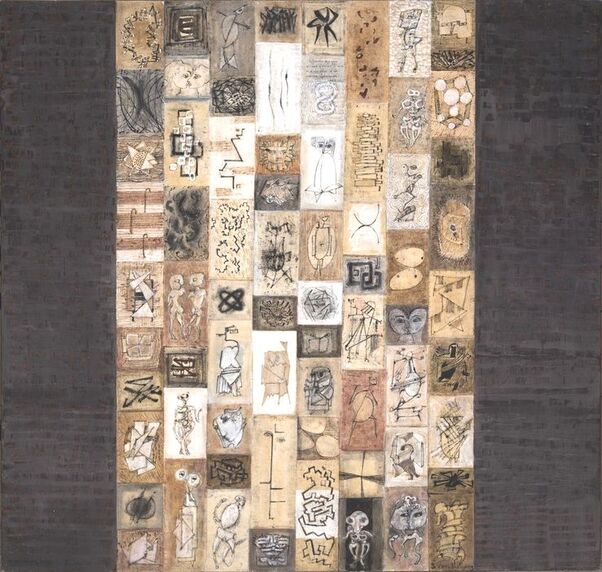 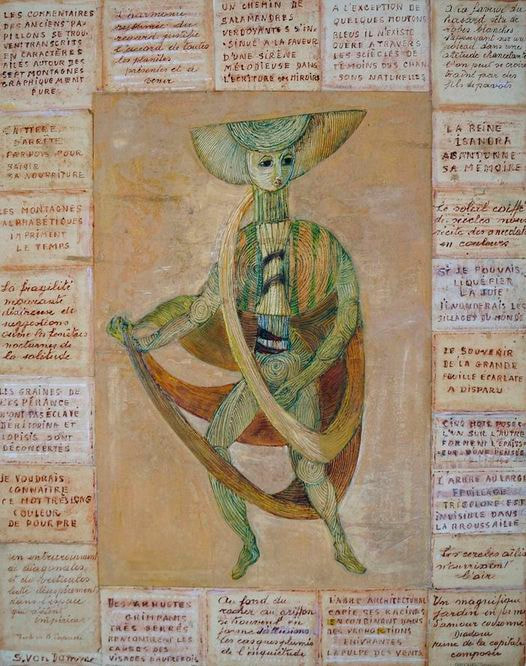 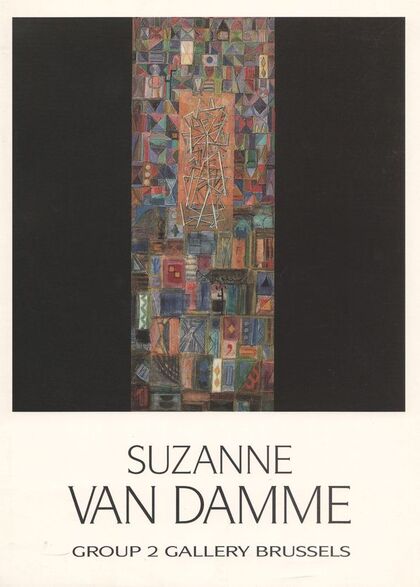 Monography by Group 2 Gallery at its opening exhibition, 1990 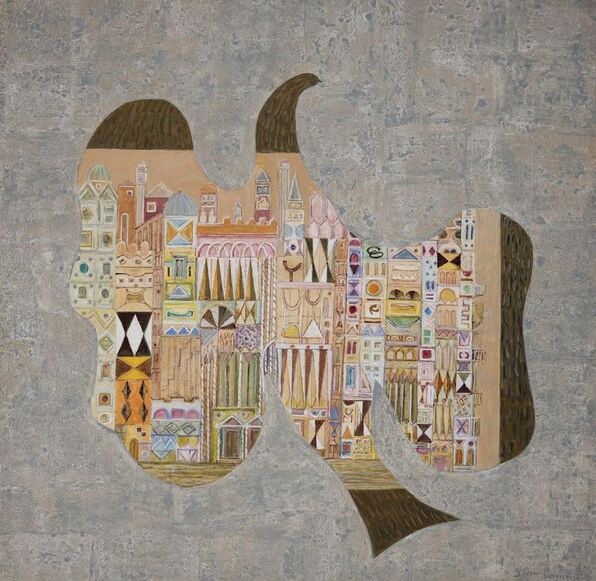 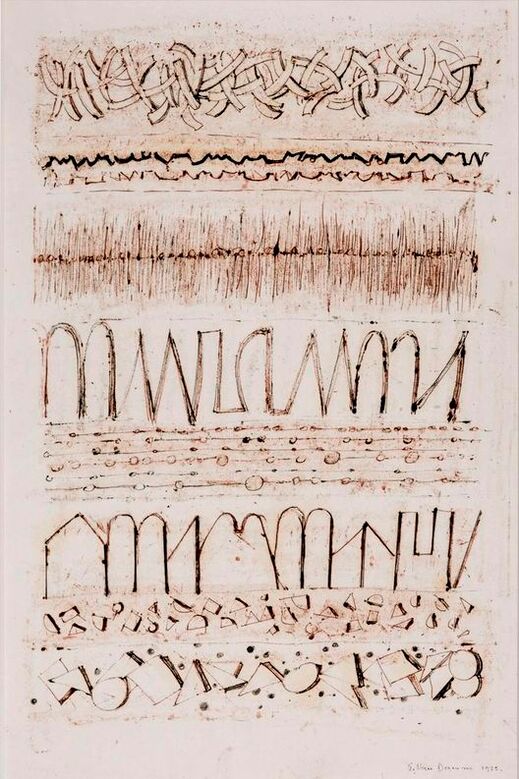 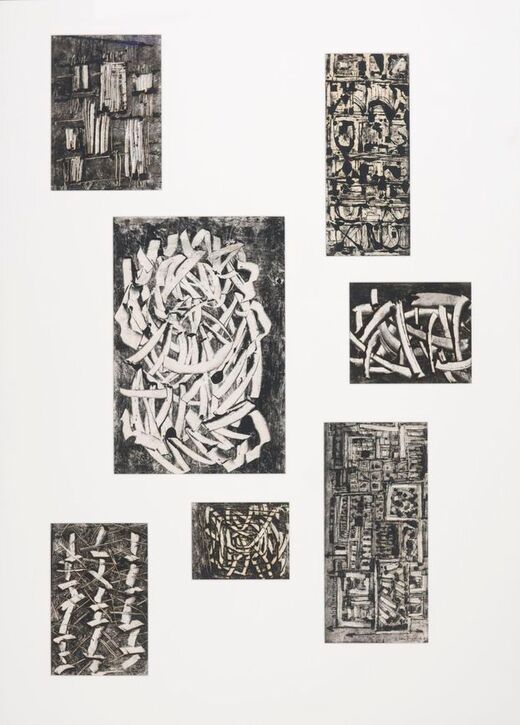 Suzanne Van Damme was born in Ghent in 1901. Disciple of James Ensor in her early years, she painted the great Master in his Ostend home in 1925 with "The Entry of Christ in Brussels", which now belongs to the Getty Museum in Los Angeles- in the background. In 1938 Ensor painted a canvas "Peintres aux Prises", featuring Suzanne Van Damme - pencil in hand - and himself seated and looking up at her. After several exhibitions in Brussels (Galerie Manteau in 1931 and Galerie Georges Giroux  in 1933), Suzanne moved to Paris in the early 1930’s.  Both Galerie de Paris (1934) and Galerie Bernheim (1935) exhibited her work. In "Le Dôme" in Montparnasse she met Italian painter, ceramist and poet Bruno Capacci (Venice 1906-Brussels 1996), whom she married. The couple became friends with french artists such as Marcel Duchamp and Jean Cocteau.
Van Damme worked closely with several surrealist poets such as Paul Colinet, Marcel Lecomte, Henry Bauchau e.a. Their poems were regularly dedicated to her, while her compositions turned into a mixture of literary and pictorial items. Her love for poetry together with her experiments in the graphic field, were bound to give birth to a new script, a kind of private alphabet full of signs and symbols, a mysterious blend of Japanese calligraphy and Egyptian hieroglyphs in mere black and white.
In 1947 the "pope of surrealism" André Breton invited Capacci and Van Damme to take part in the famous “Exposition Internationale du Surréalisme” at Galerie Maeght in Paris, together with famous contemporaries such as Arp, Bellmer, Brauner, Calder, Duchamp, Ernst, Giacometti, Gorky, Lam, Matta, Miro, Picabia, Man Ray, Tanguy, Tanning and many others.
When the couple moved to Florence in the 1950’s, Suzanne was very much impressed  by the beauty of Tuscany, the colours of the earth, the sand, the pebbles, the marble… She started painting or rather "sculpting" abstract ondulating forms on canvas.
In the 1950’s and the 1960’s Suzanne Van Damme exhibited regularly in the USA :  Chicago (Marshall Field Gallery 1959), New York (Thibault Gallery on Madison Avenue 1961), Los Angeles, Baltimore, Dallas (Calhoun Gallery 1961), Denver (Saks Gallery 1969) etc..
During her long career, Van Damme exhibited five times at the Palais des Beaux-Arts in Brussels and she participated at the Venice Biennials in 1935, 1954 and 1962 and at the Sao Paulo Biennial in 1953.
Her last period is certainly the most personal and interesting one. A series of individual abstract and figurative little scenes are brought together on canvas or on panel, forming a large patchwork. Most of these cryptograms - ideograms are painted in black, brown and beige, shedding a veil of timeless beauty over the primitive signals and the mythological figures. Others look like stained glass panels in every possible shade of blue, purple, red or orange, glowing with an inner light full of mystery. It takes a great deal of talent to reach the ideal harmony, the ultimate balance, the perfect Ying-Yang every artist is dreaming of.  Suzanne Van Damme definitely had that talent. She died in Brussels in 1986.
The opening exhibition of Group 2 Gallery in 1990 was a tribute to Suzanne Van Damme. In 1992 the gallery organized a second solo show ​"Suzanne Van Damme - from Realism to Surealism", followed by a confrontation of her work with that of her husband Bruno Capacci in 1996. In 2010 Group 2 Gallery celebrated its 20th anniversary with another solo exhibition of Suzanne Van Damme.
In 2015, 25 years after the opening show at Group 2 Gallery, several surrealist works of Van Damme were on view at ﻿Sotheby’s New York Gallery in the exhibition ﻿﻿“Cherchez la femme”﻿﻿﻿, together with surrealist works by other female artists such as Frida Kahlo, Leonor Fini, Meret Oppenheim, Leonora Carrington, Dorothea Tanning, Dora Maar etc..