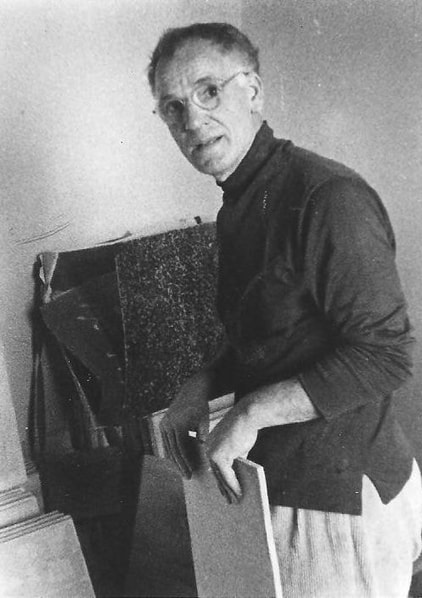 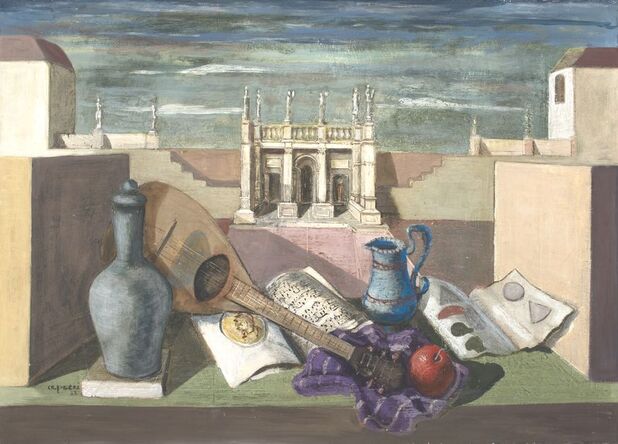 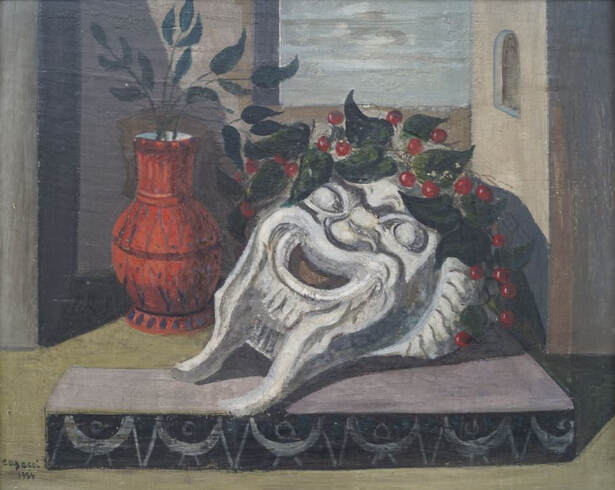 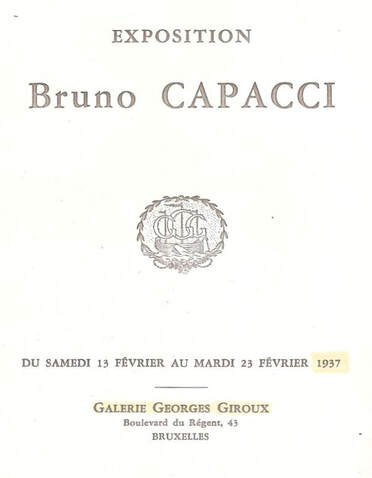 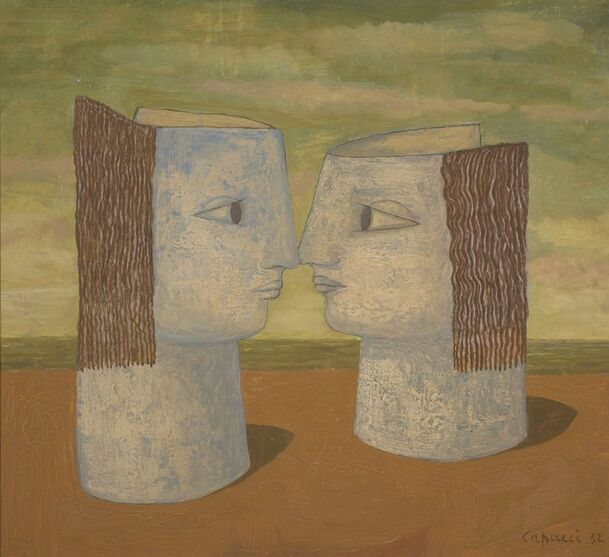 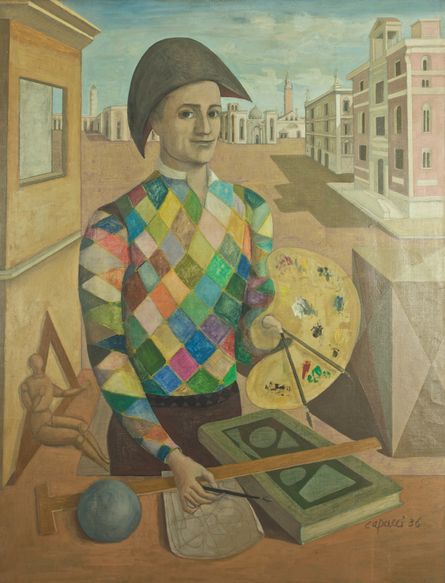 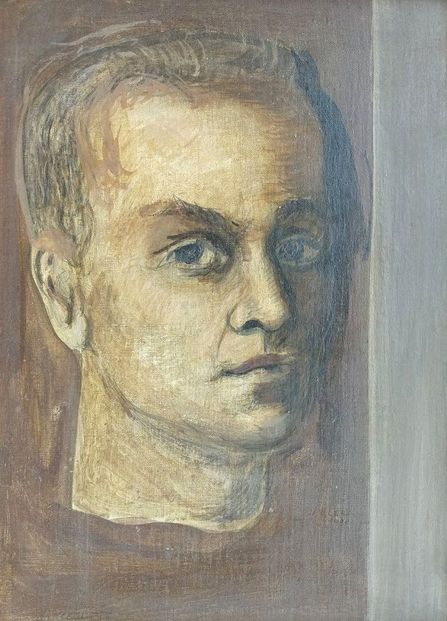 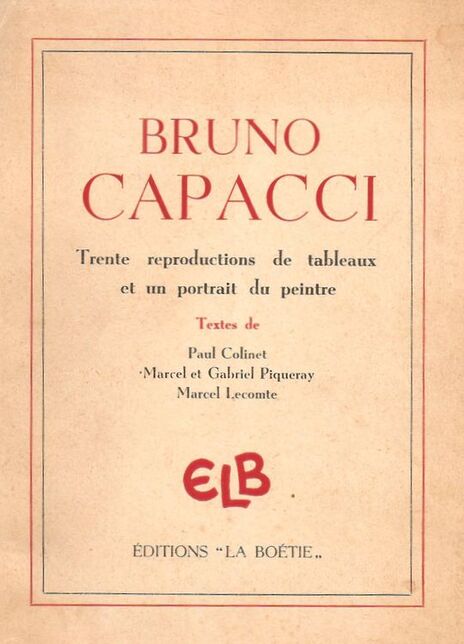 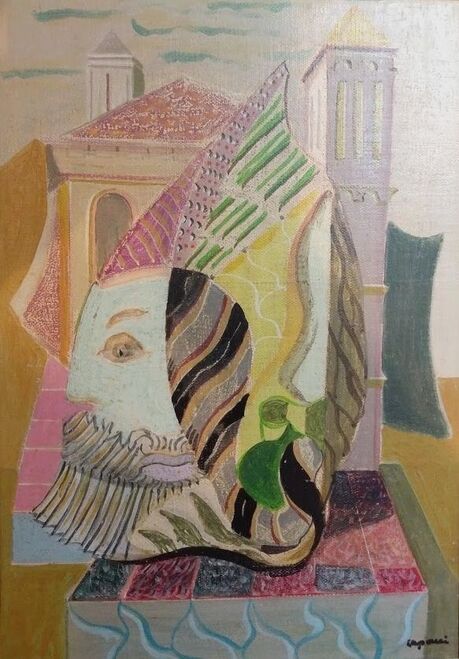 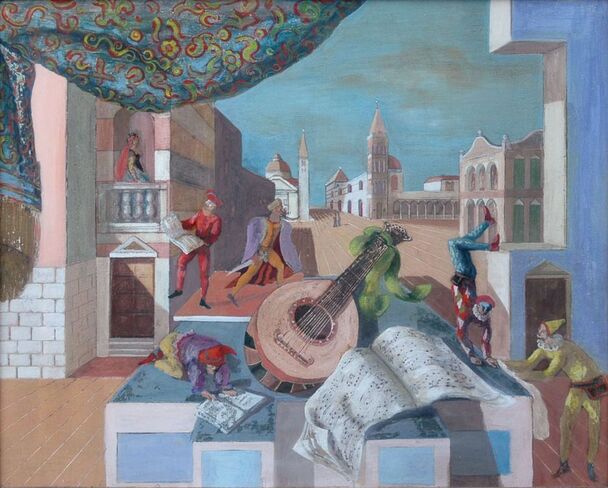 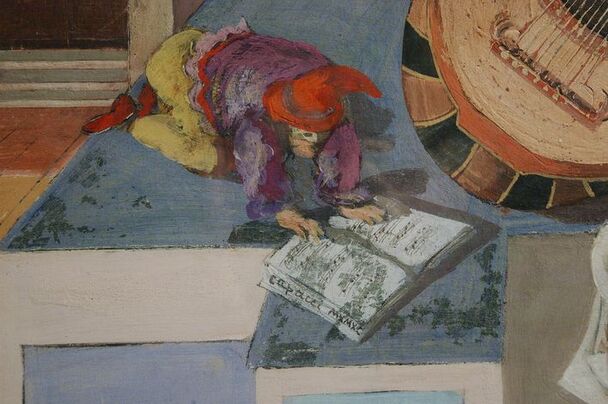 Detail with the artist's signature 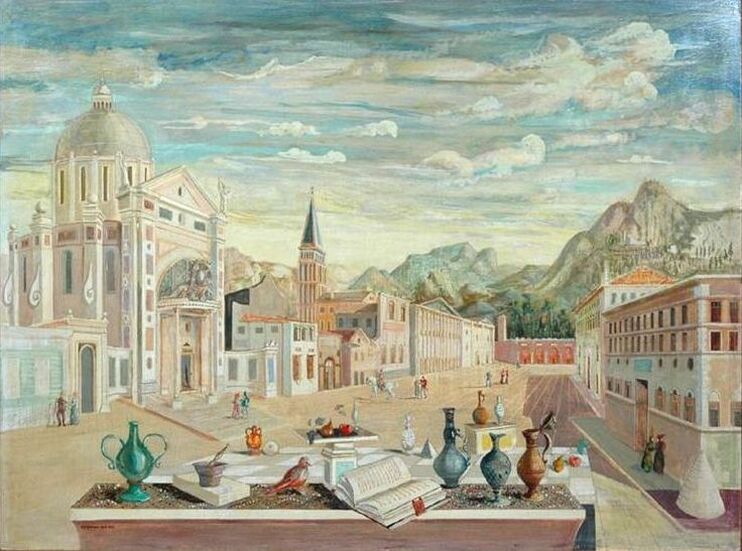 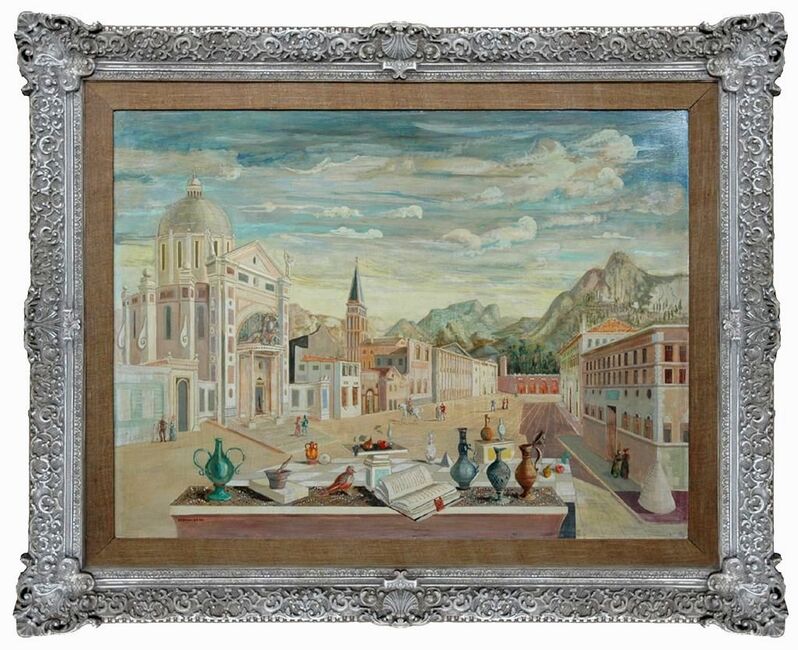 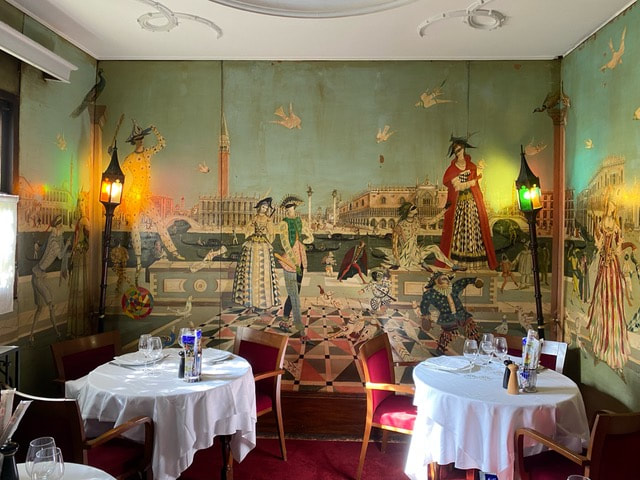 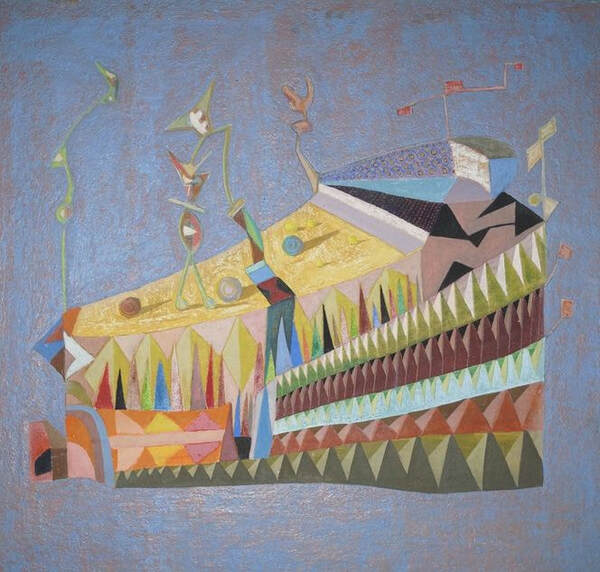 1960's : Capacci and his wife live and work in Florence
​They exhibit in the U.S. and make ceramics 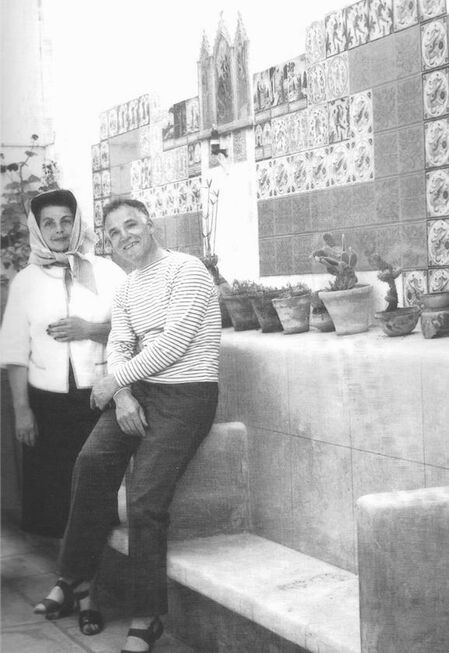 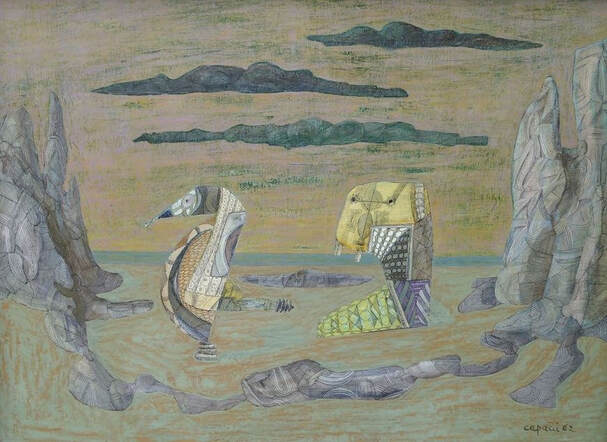 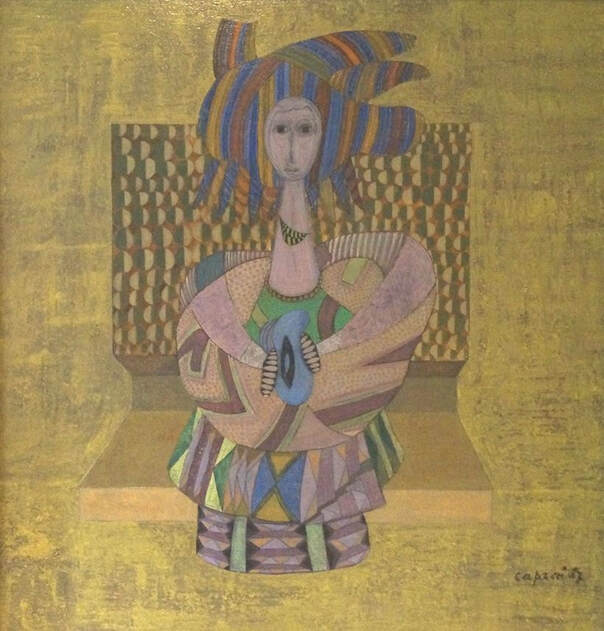 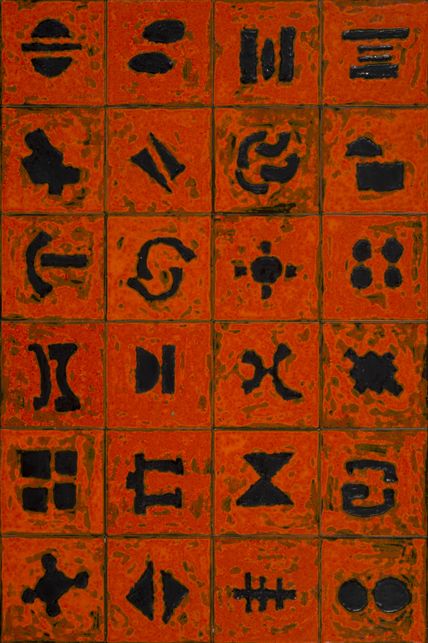 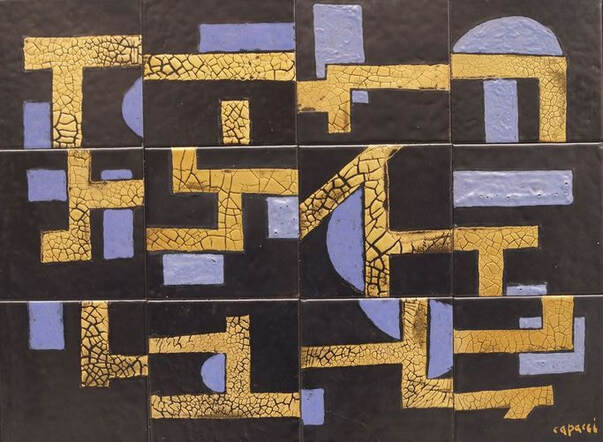 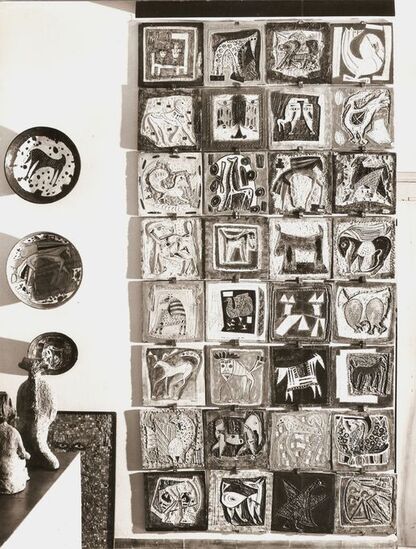 Composition of ceramics tiles in the artist's house in Florence 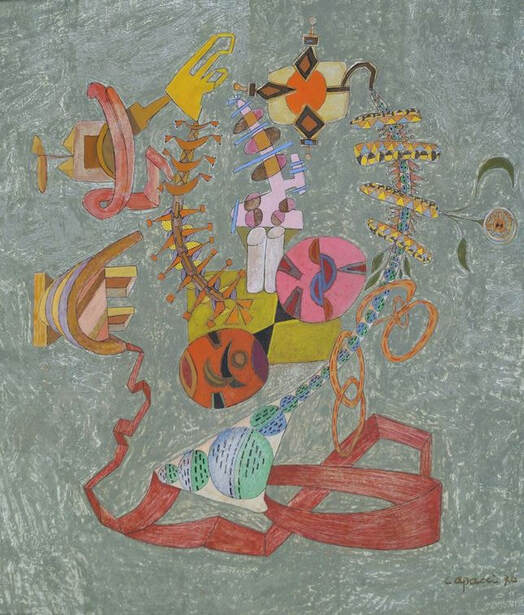 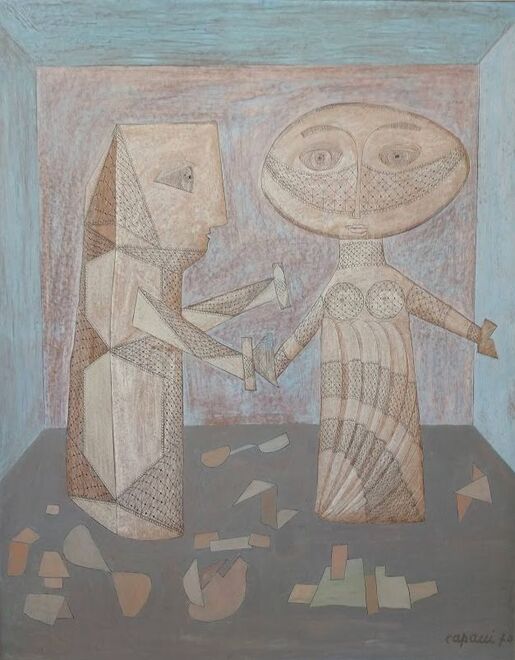 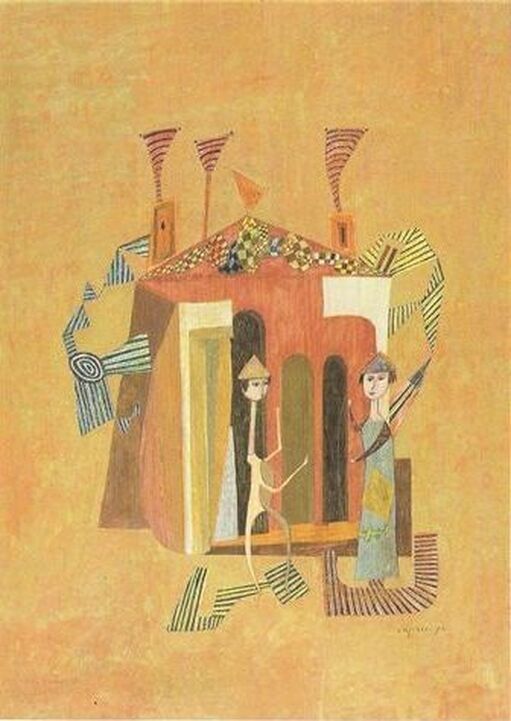 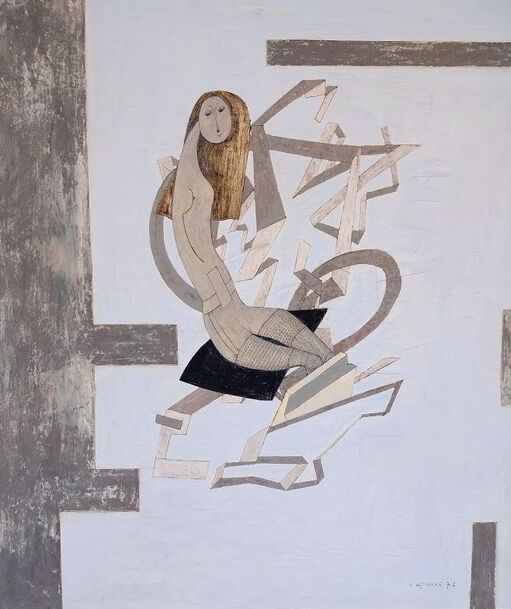 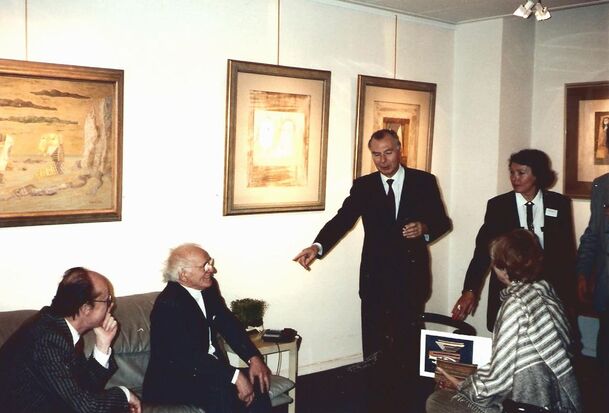 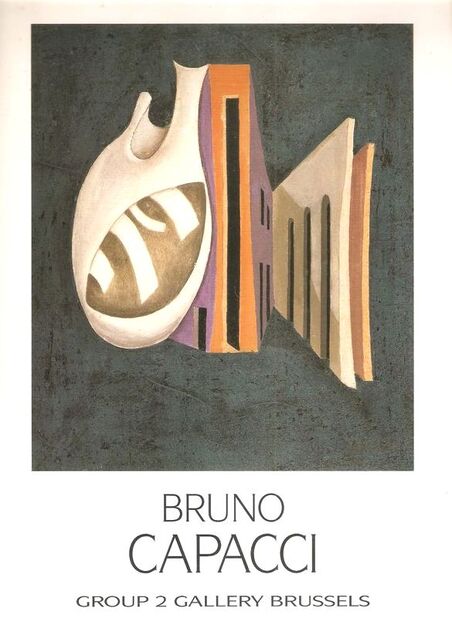 Monography by Group 2 Gallery published in 1991

Bruno Capacci was born in Venice in 1906 but spent his youth in Florence.  In 1930 he settled in Paris where he became a member of "Les Italiens de Paris" together with de Chirico, Severini, Magni, Magnelli and Léonor Fini. In his "metaphysical period" Capacci was influenced by de Chirico and by great masters of the Renaissance such as Uccello, della Francesca and Ghirlandaio.
In "Le Dôme" in Montparnasse he met Belgian artist Suzanne Van Damme, whom he married. The couple became friends with surrealist poets Paul Eluard, Paul Colinet, Marcel Lecomte, Louis Scutenaire and Henri Bauchau and with André Breton, Marcel Duchamp, Jean Cocteau, Louise de Vilmorin, Federico Fellini, Jean Paulhan, actor Louis Jouvet and many others.
In 1947 the "pope of surrealism" André Breton invited Capacci and Van Damme to exhibit at the“Exposition Internationale du Surréalisme” at Galerie Maeght in Paris, together with famous artists such as Arp, Bellmer, Brauner, Calder, Duchamp, Ernst, Giacometti, Gorky, Lam, Matta, Miro, Picabia, Man Ray, Tanguy, Tanning and many others.
Capacci's paintings got more and more refined and poetic. He also published surrealistic poems in the book "La balustrade du Possible". His paintings reveal his boundless imagination, a delicate palette and, above all, his extraordinary joy of life. His favorite themes involve lunar characters reminiscent of Klee and Brauner and a fantastic bestiary
When the couple moved to Florence in the 1950’s, they built a beautiful house with a breathtaking view on the surrounding hills of Fiesole. Inspired by his great example Andrea Della Robbia, Capacci started making a series of ceramics which he put everywhere in his house and sold to a wide range of clients, including a large number of wealthy americans. Every year, the couple exhibited in american galleries : Chicago (Marshall Field Gallery 1959), New York (Thibaut Gallery on Madison Avenue 1961), Los Angeles, Baltimore, Dallas (Calhoun Gallery 1961), Denver (Saks Gallery 1969) etc.. Capacci also took a fancy to marble and mosaic and made numerous panels with encrustations inspired by ancient Etruscan and Byzantian art. As an all-around artist and poet, Capacci made porcelain plates which found their way to the Haviland factory in Limoges, Christofle in Paris and the Rosenthal studio in Germany.
In the 1970's Capacci and Van Damme moved back to Brussels where they lived in a house near avenue Louise.
Group 2 Gallery's opening show in 1990 was a tribute to Suzanne Van Damme, followed by a Capacci solo exhibition in 1991. Capacci passed away in Brussels in 1996, shortly after the opening of a new Van Damme-Capacci exhibition at the Gallery.