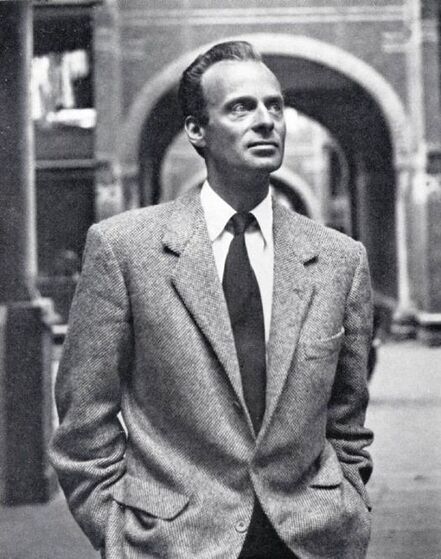 Marc Mendelson (London 1915 - Brussels 2013)
A major figure of the Belgian post-war art scene
Founding member of "La Jeune Peinture Belge" (Young Belgian Painters 1945-48).
Works ​in the collections of the Solomon R. Guggenheim Museum and the Carnegie Museum of Art in Pittsburgh.
​Scroll down for Mendelson's biography 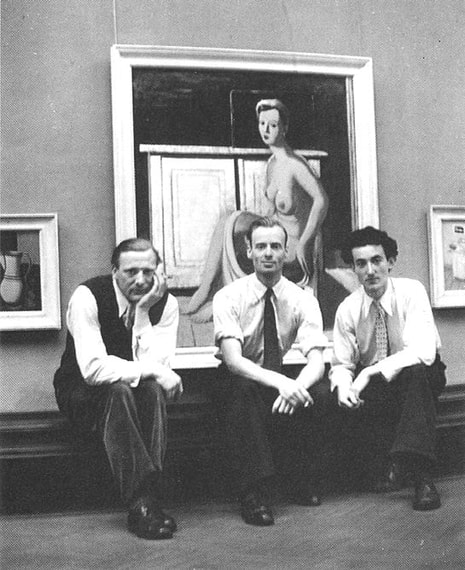 Exhibition of Rudolf Meerbergen, Marc Mendelson & Jan Cox.
Galerie Lamorinière, Antwerp, 1943
In the background a small painting of a jug by Mendelson and his iconic "Nude in front of a cupboard", 1943
Robert Giron, director of the Palais des Beaux Arts in Brussels invited the trio to exhibit at the PBA. 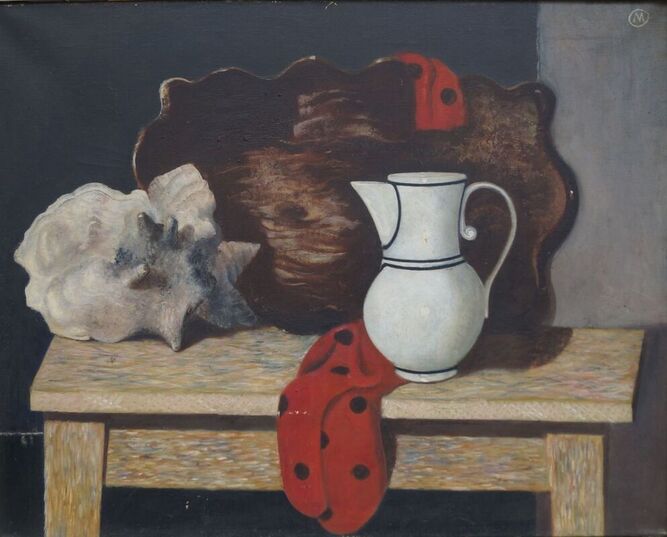 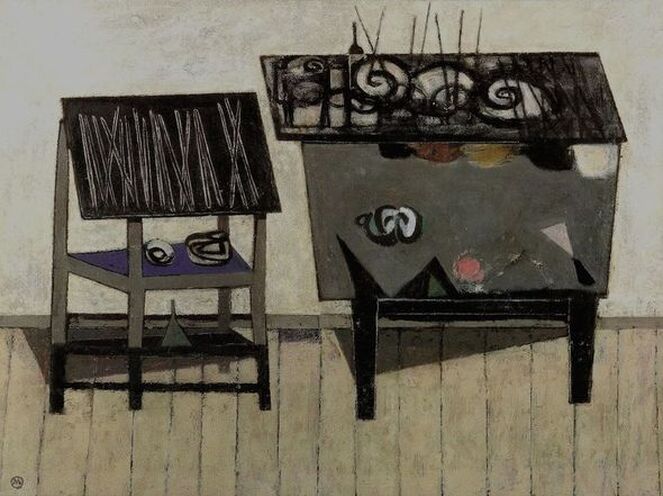 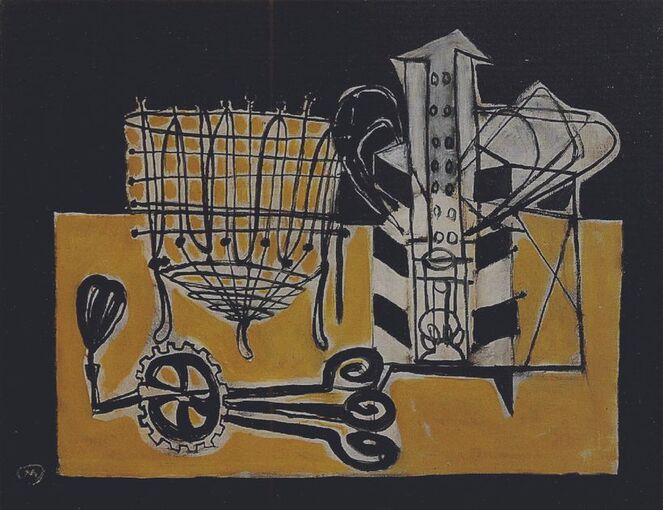 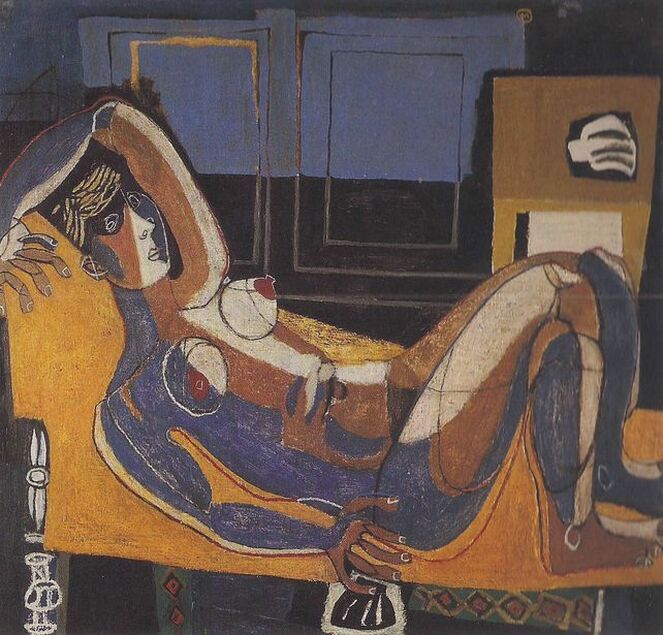 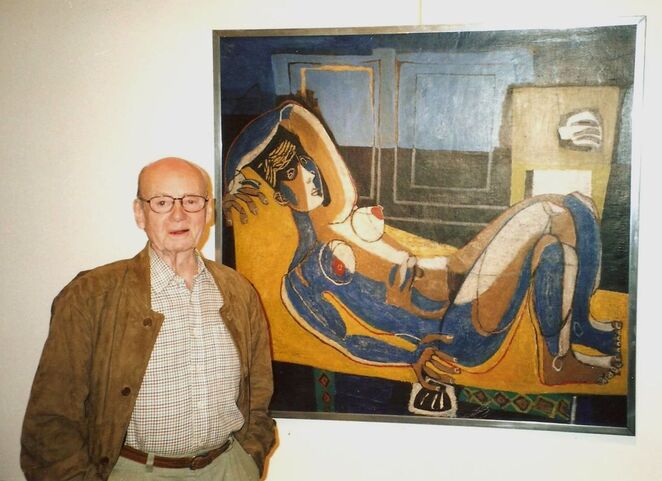 Marc Mendelson at Group 2 Gallery in 2003 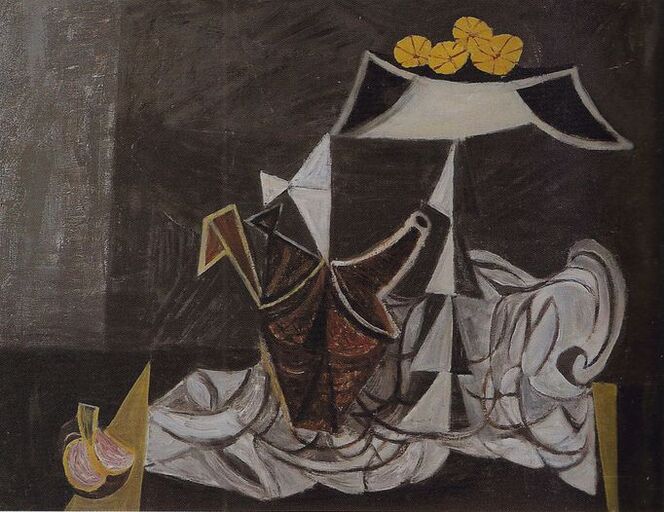 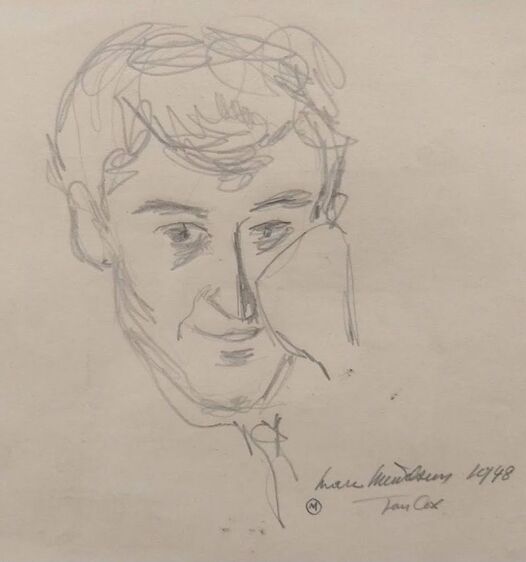 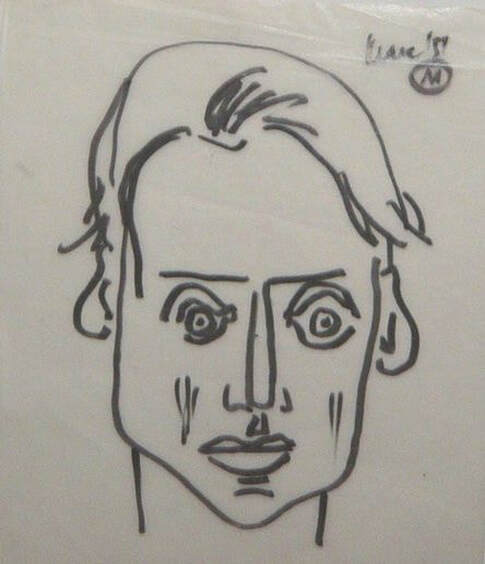 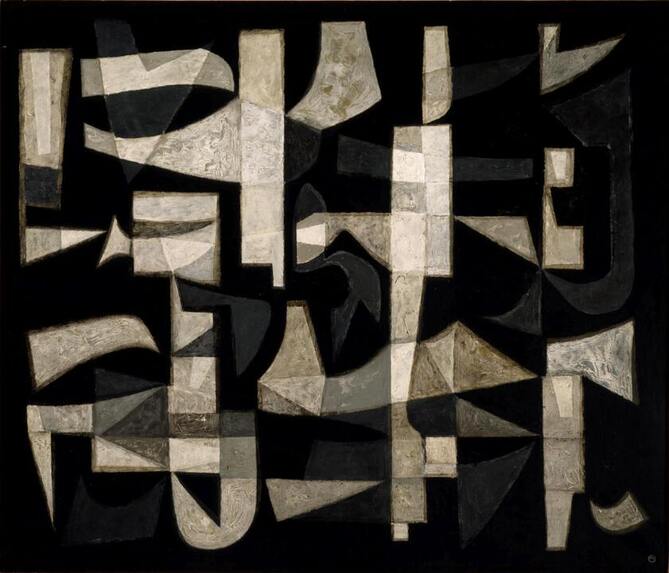 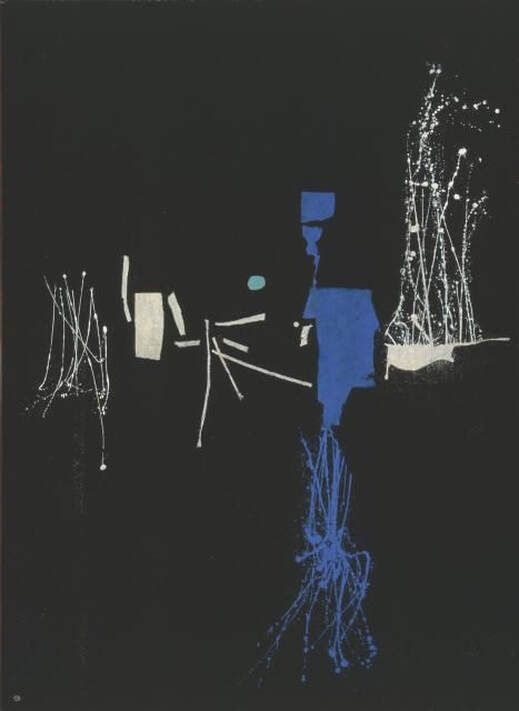 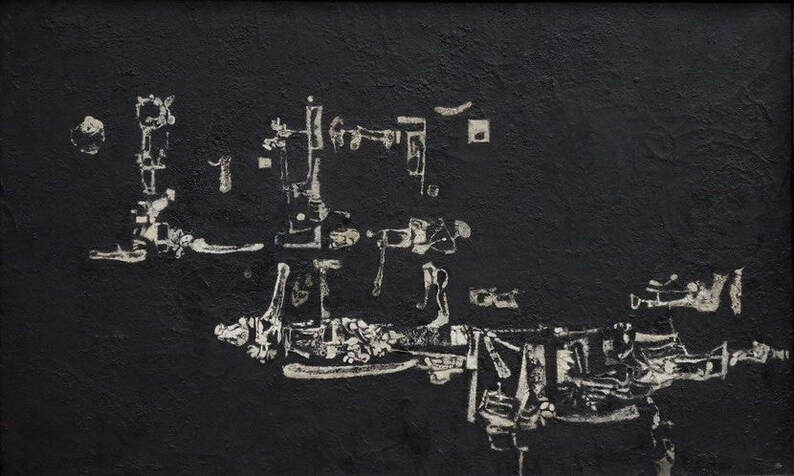 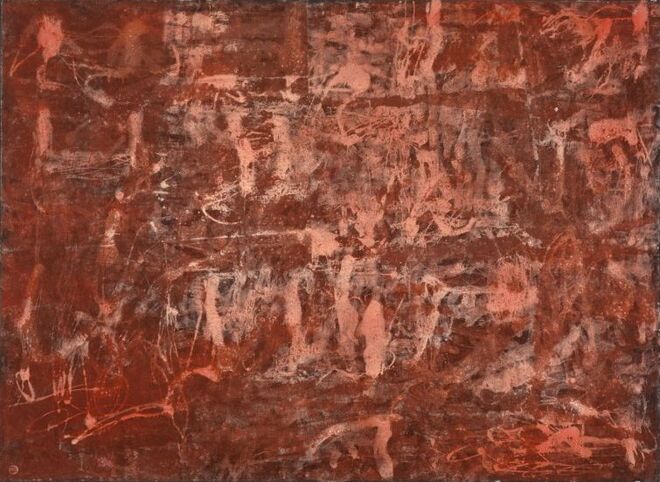 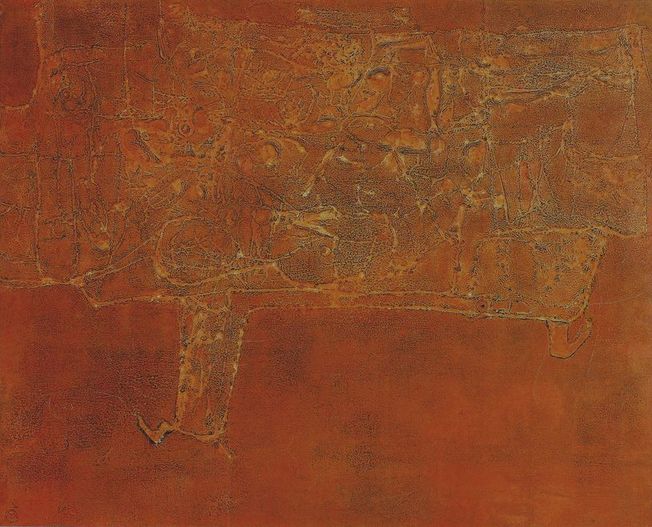 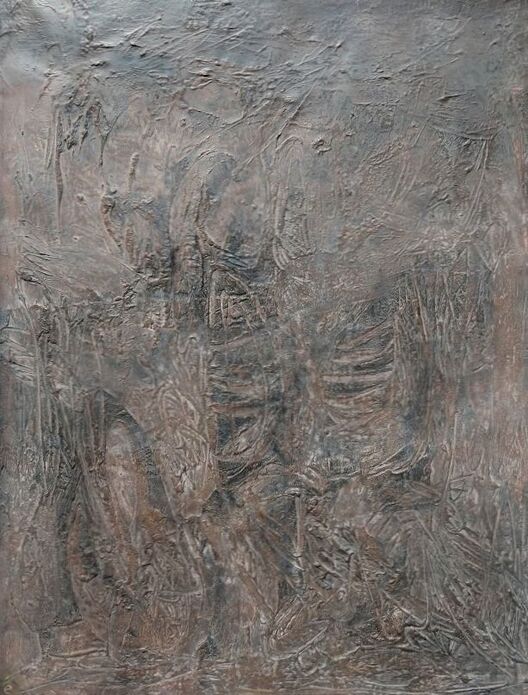 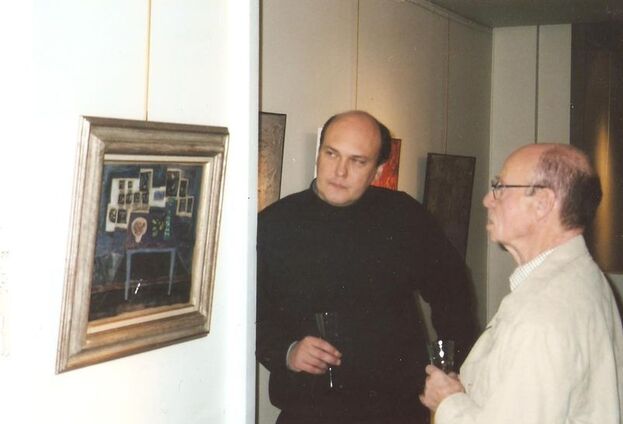 ​Monumental mural "Happy Metro to You" at the Brussels underground station "Park", 1974 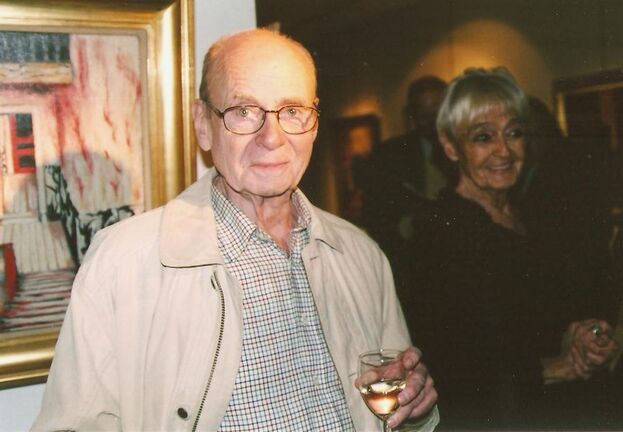 Marc Mendelson and Odette Collon, two members of the "Young Belgian Painters"
​at Group 2 Gallery in front of a work by fellow member Gaston Bertrand

Marc Mendelson was born in London in 1915 from a belgian father and an english mother. The family moved to Antwerp in 1922. He studied at the Antwerp Fine Arts Academy from 1934 to 1939. In 1943 Robert Giron visited an exhibition of Mendelson and fellow artists ​​Rudolf Meerbergen and ​Jan Cox in Galerie Lamorinière in Antwerp and invited the trio to exhibit at the Palais des Beaux-Arts in Brussels. Mendelson excelled in painting portraits and metaphysical still lifes reminiscent of the "magical realism" of Giorgio de Chirico. The same year Mendelson was arrested and jailed by the germans for several months. After his liberation with the help of his friend Jan Cox, Mendelson became a founding member in 1945 of the avant-garde group "Jeune Peinture Belge" - "Young Belgian Painters" promoted by Robert Delevoy, director of ​​Galerie Apollo and by art mecenas René Lust. Up to 1948 the JPB managed to organize exhibitions in Brussels, Paris, The Hague, Stockholm, Zurich, Milan, Oxford and even in Cairo and Alexandria ! Mendelson subsequently exhibited at the Venice Biennial in 1948 and 1956, the São Paulo Biennial in 1951 and the Carnegie Institute in Pittsburgh in 1952. He particpated at the Younger European Painters: A Selection (1953–54) at the Guggenheim Museum. The same year he was commissioned to produce murals for the Ostend Kursaal, and, with fellow Jeune Peinture Belge member Louis Van Lint, murals for the Canterbury restaurant in Brussels. In 1951 Mendelson became a Professor at the "École nationale supérieure d’architecture et des arts décoratifs La Cambre" in Brussels. He discovered Palamos in Catalonia in 1953 and spent henceforth several months a year in his beloved Costa Brava. During the 1950's Mendelson’s work became increasingly abstract. In the early 1960's he experimented with surface variations and matierism - Mendelson preferred the term "relief paintings" -, the method of including materials such as sand, mud, or cement into thick impasto and applying it to the canvas, a technique also used by Jean Dubuffet and Antoni Tàpies. In the mid 1960's Mendelson returned to figuration by painting humanoid figures with a touch of english humour. In 1974 he was commissionned to make a monumental work "Happy Metro to You" at the underground station "Park" in Brussels. Major Retrospectives of his work were held at the Ostend Museum of Modern Art in 1995 and at the Royal Fine Arts Museum of Belgium in Brussels in 2010. In 2000 a tribute exhibition was held at Group 2 Gallery on the occasion of his 85th birthday. Mendelson passed away in Brussels in 2013 at the age of 97.