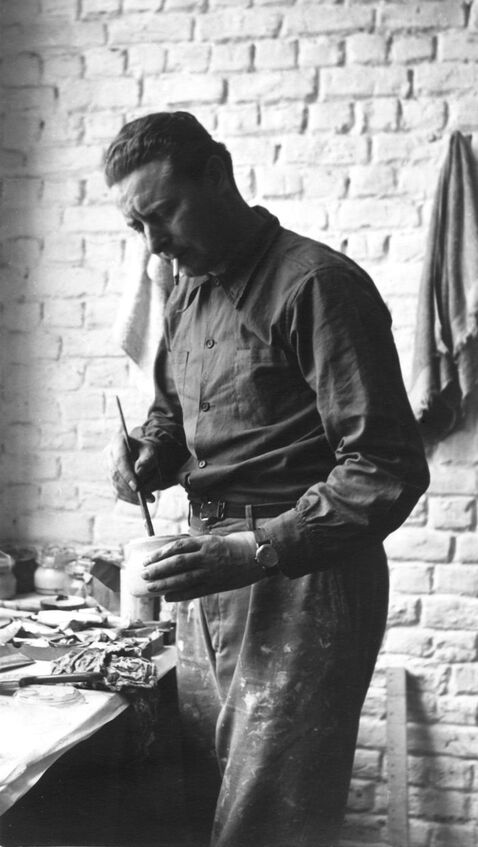 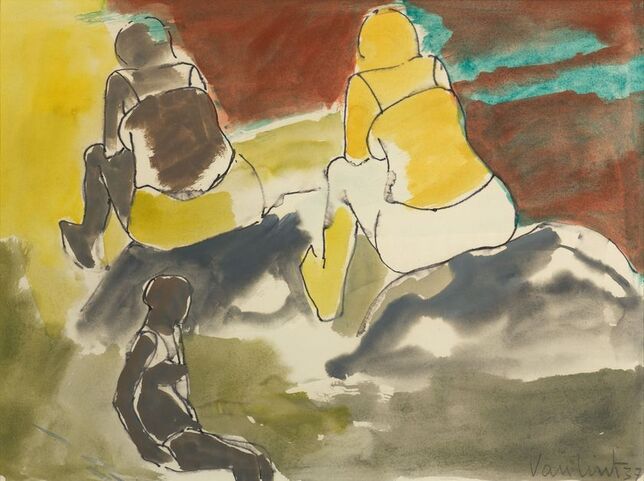 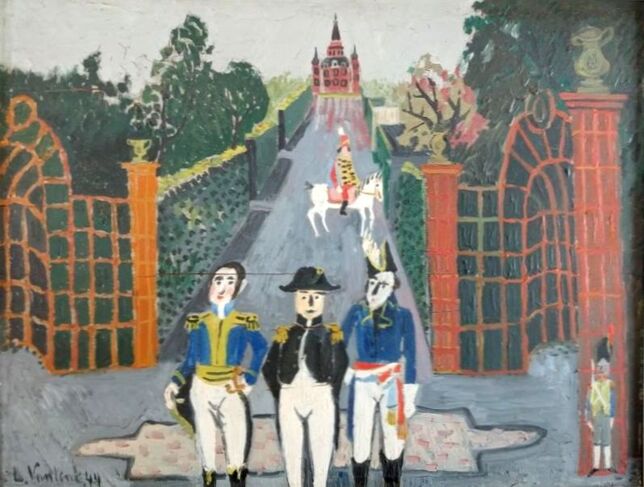 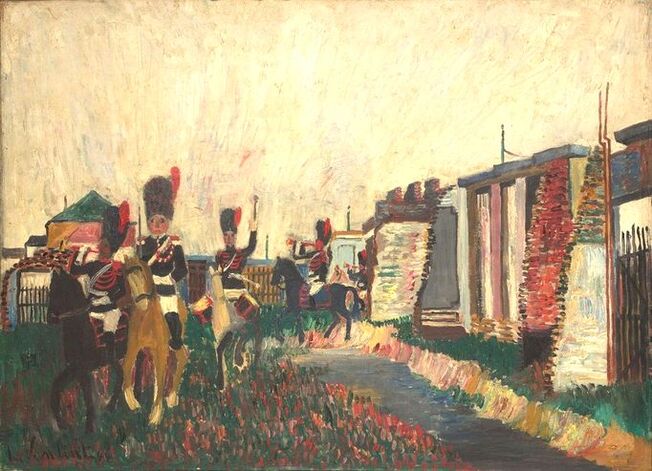 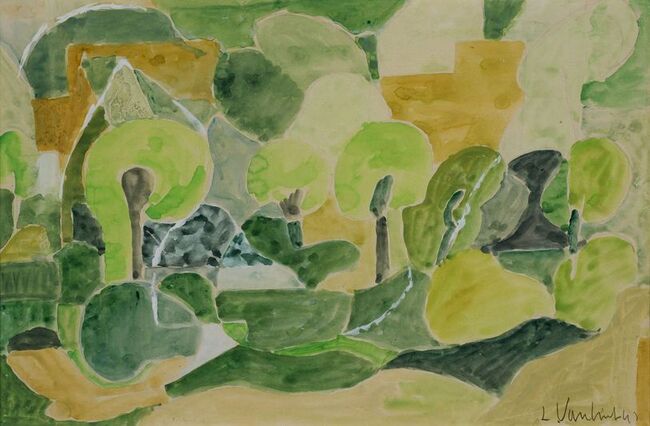 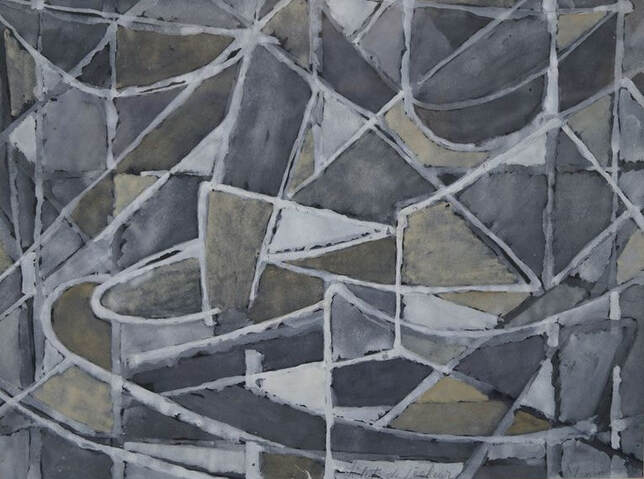 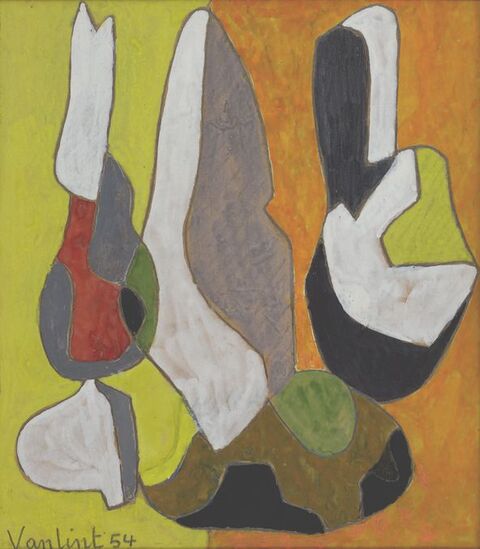 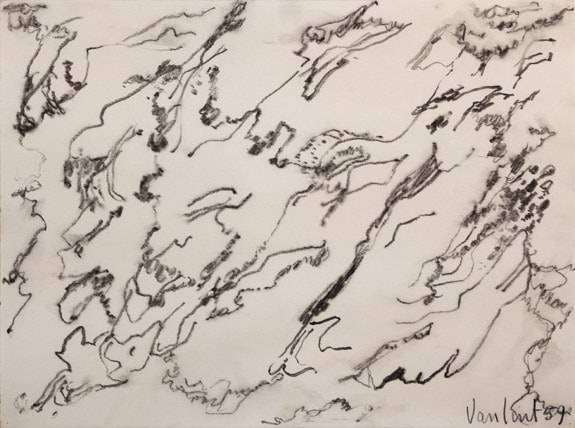 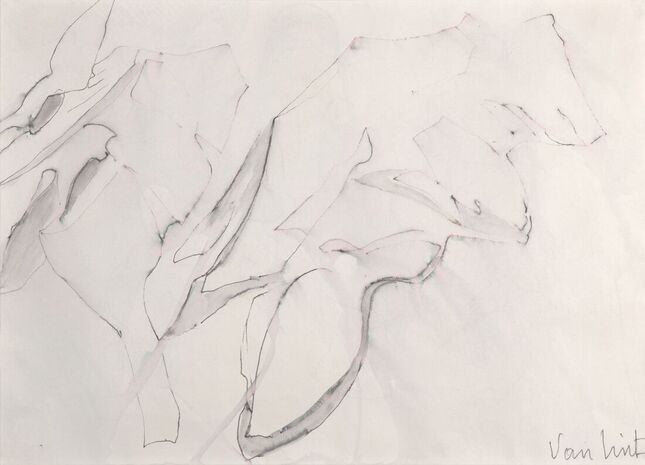 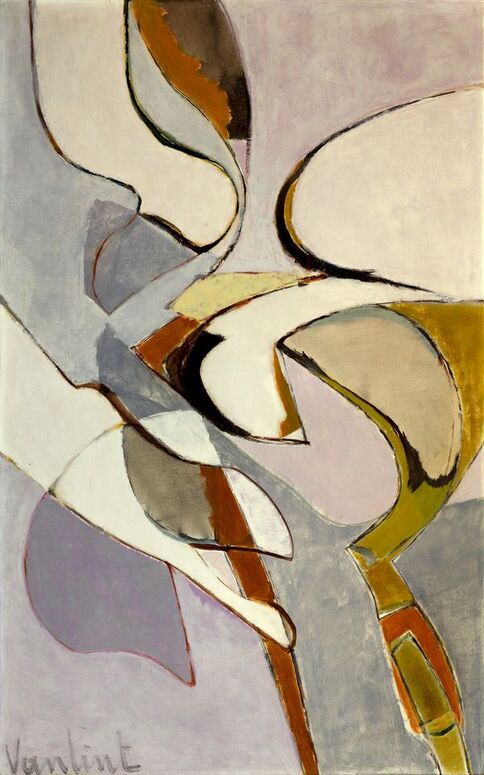 "Kamiros" 1972,  Oil on canvas
Inspired by an archeological site in Rhodos, Greece
​SOLD 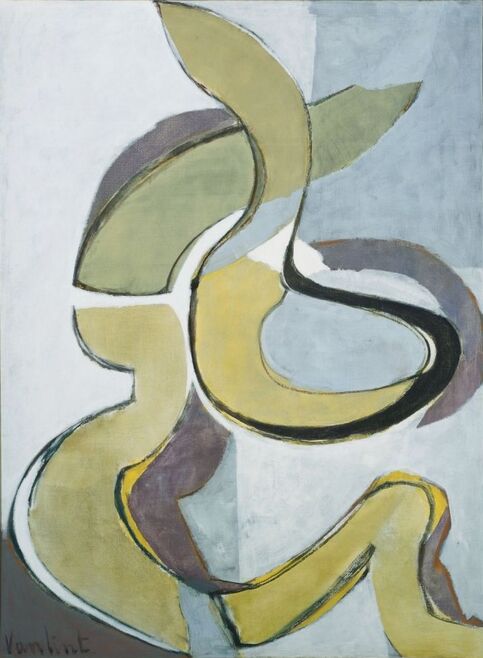 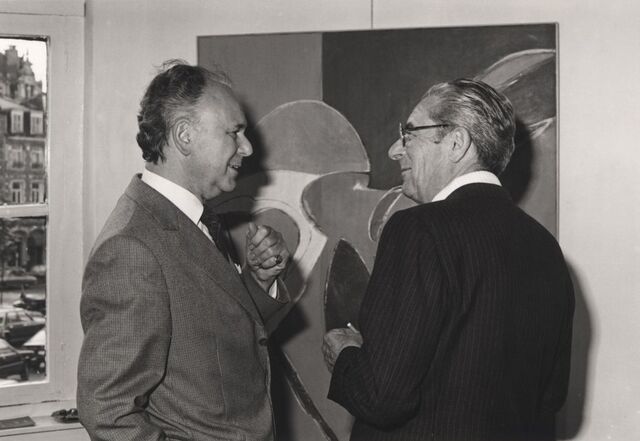 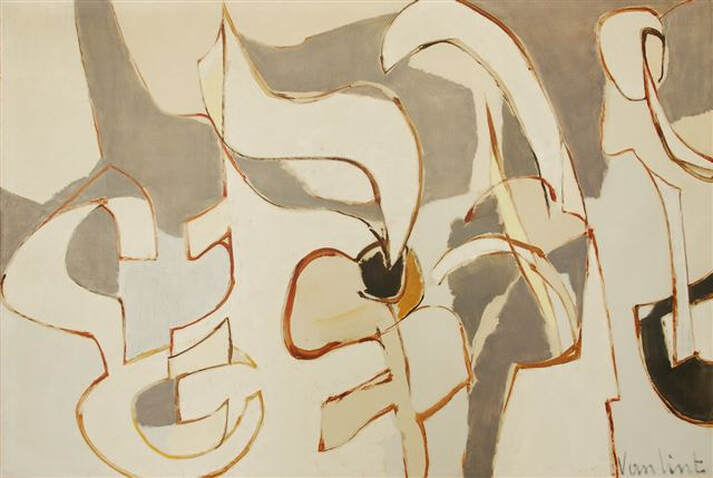 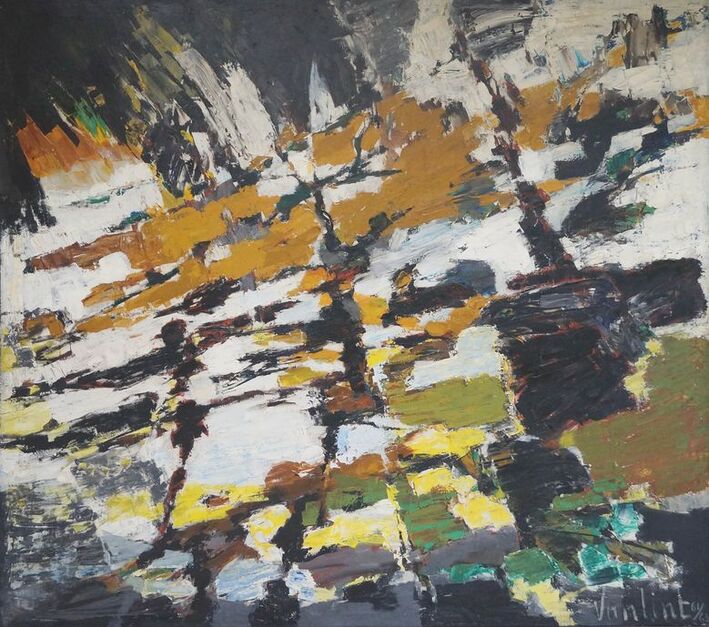 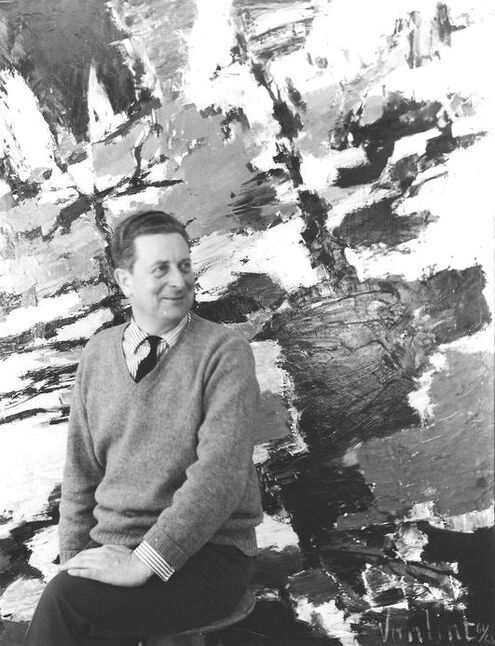 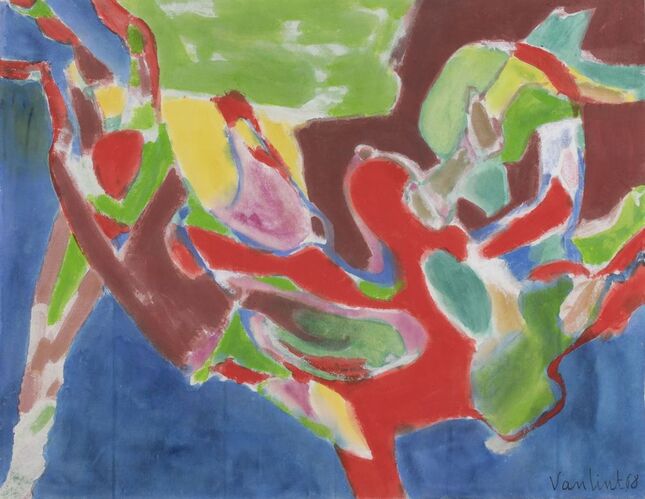 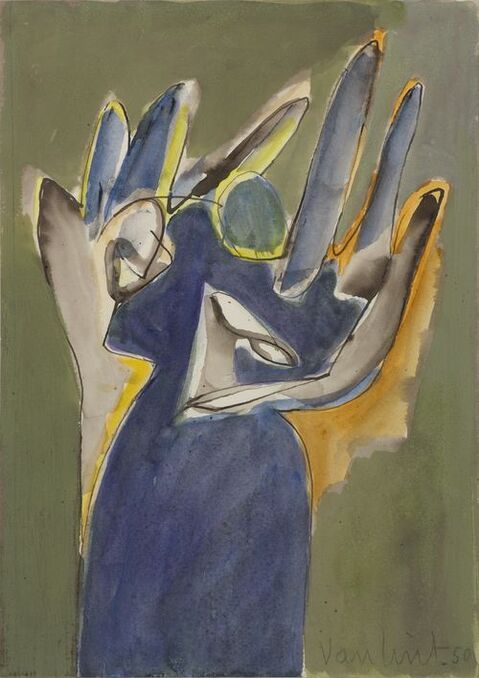 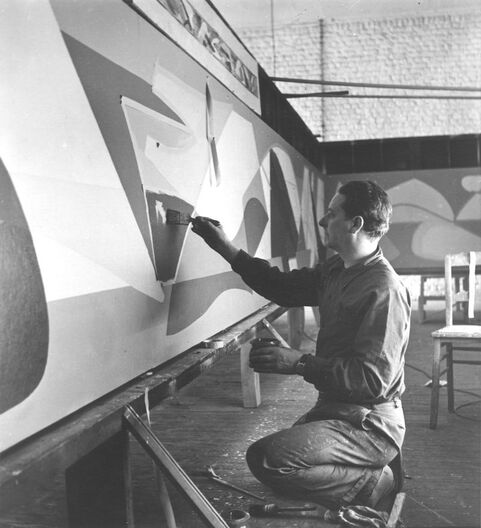 Van Lint working at a mural painting in 1957

Louis Van Lint ​(Brussels 1909-1986), a major figure of the post-war Belgian art scene, studied at the Academy of Saint-Josse-ten-Noode in Brussels until 1939. His early work reflects a traditional figurative painting style with a unique sense of color. In 1940 he founded the group "La Route Libre" with Gaston Bertrand and Anne Bonnet. His art was influenced to some degree by the animist movement, but he eventually broke away from it with his painting "The Flayed Body" (L'Ecorche, 1943), a shocking expression of his quest for artistic freedom that consequently sounded a revolt against animism. As his style matured, he switched to abstraction in which he excelled as a colourist. After World War II he co-founded the well-known group of "La Jeune Peinture Belge". He participated in the activities and exhibitions of the COBRA group and subsequently experimented with geometric abstraction in the 1950's. His work was inspired by all elements of nature and by the end of that decade he started to paint very recognizable lyrical abstract compositions. Van Lint participated in the activities and exhibitions of the COBRA group. In 1958 he received an award by the Solomon Guggenheim Foundation and in 1960 he became a member of the Belgian Royal Academy. In the 1960's, he was one of the artists who introduced ​Hergé to abstract painting and who gave him private lessons. Works by the artist have entered the collections of prominent Museums, such as the Guggenheim museum in New York, the Brooklyn museum and more recently the COBRA museum in Amstelveen in 2003 and the Uffizi Galleries in Florence in 2014.
Group 2 Gallery has been promoting for many years Van Lint's oeuvre and has got several important paintings, gouaches and drawings in its permanent collection. Feel free to contact us by mail group2@skynet.be or by phone 02 539.23.09. More information about the artist can also be found on the Louis Van Lint website.