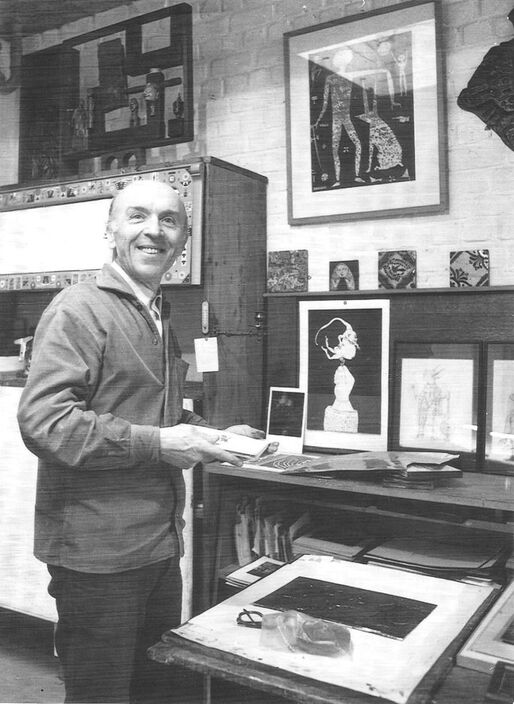 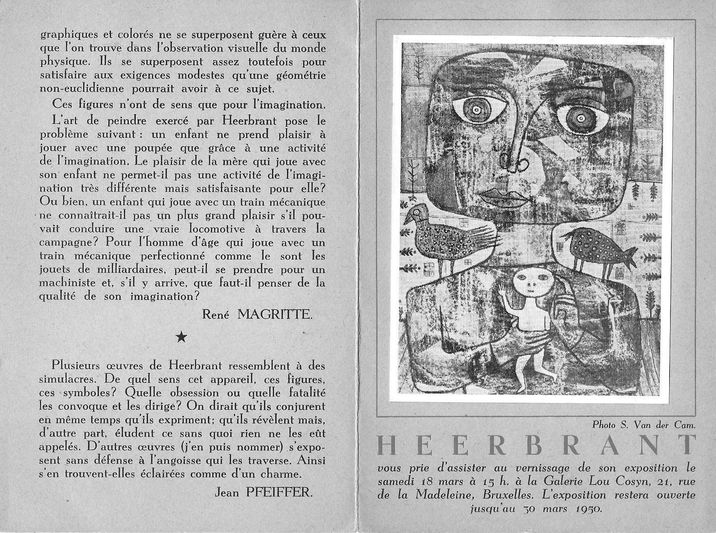 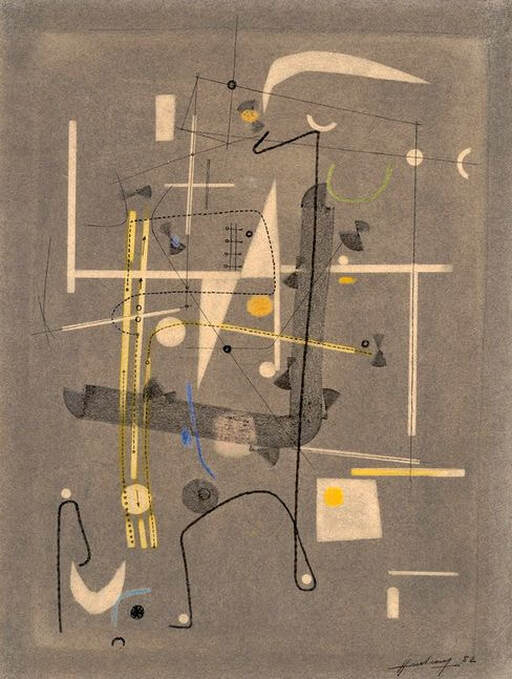 Untitled 1952, watercolor on paper
Collection of the Carnegie Museum of Art, Pittsburgh. 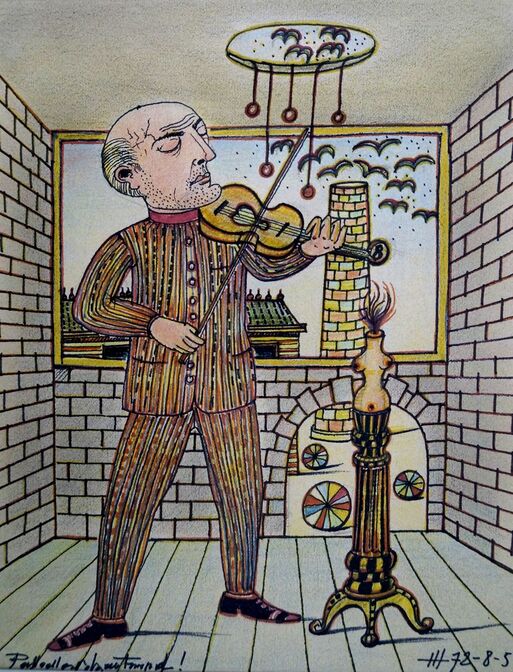 Self portrait with violin, 1972 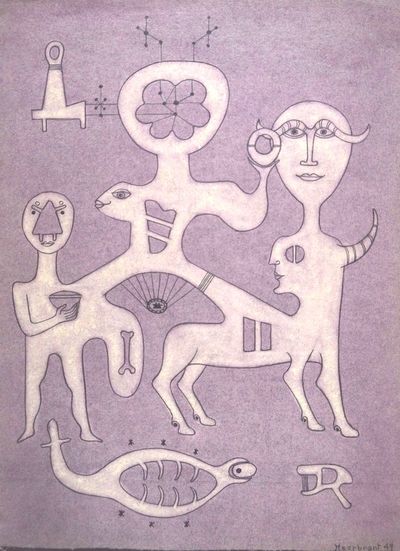 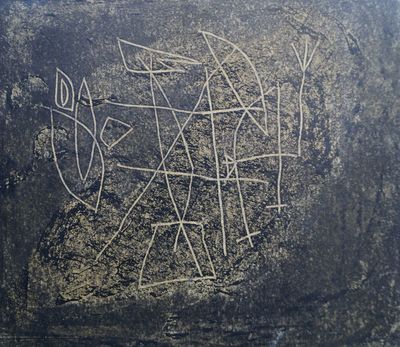 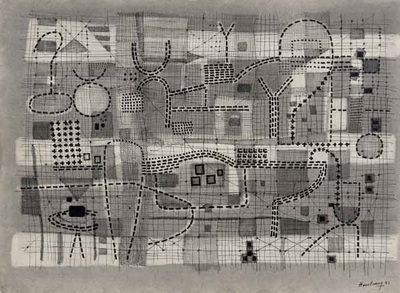 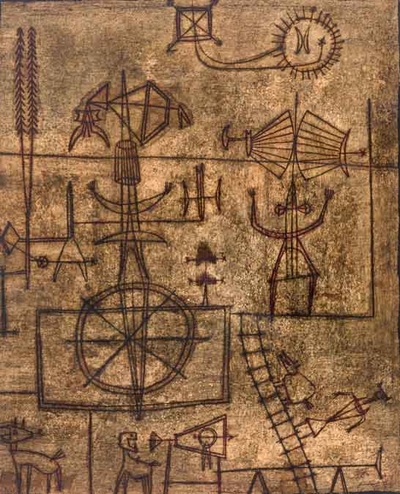 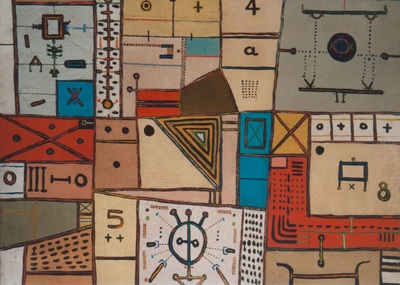 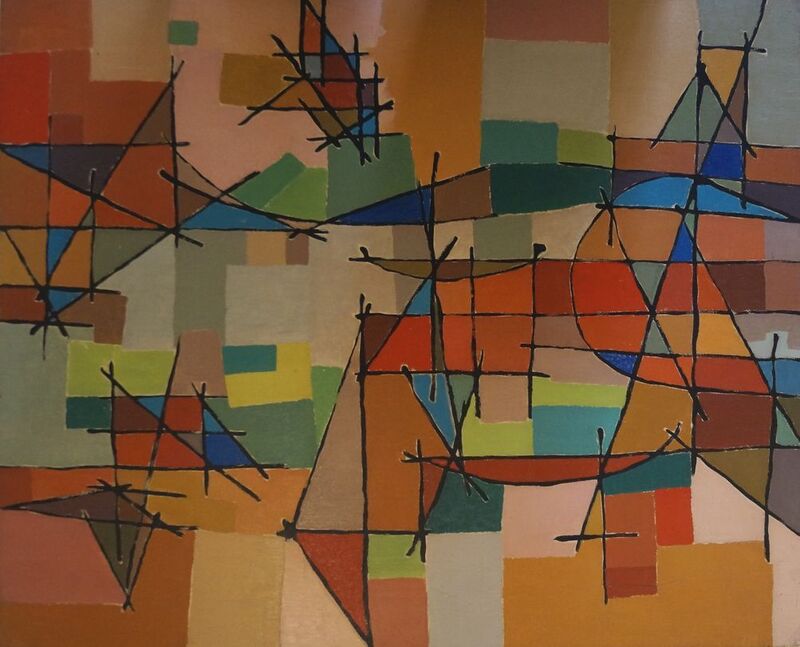 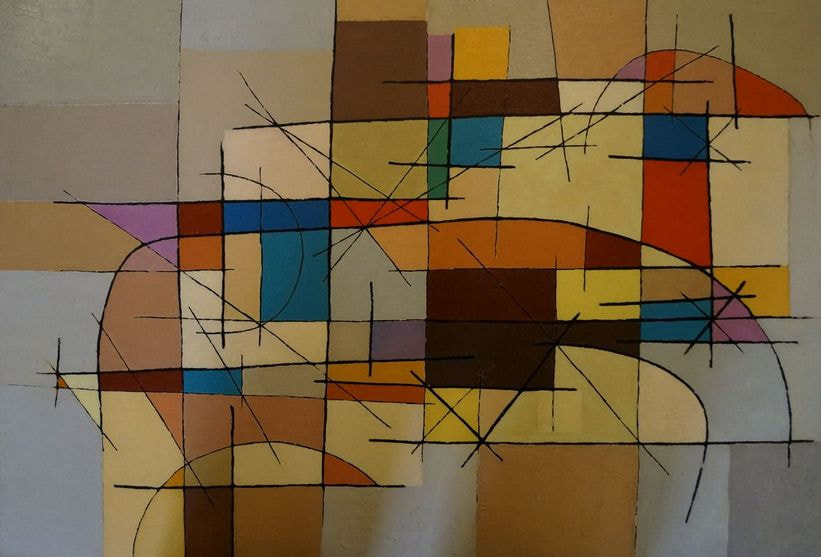 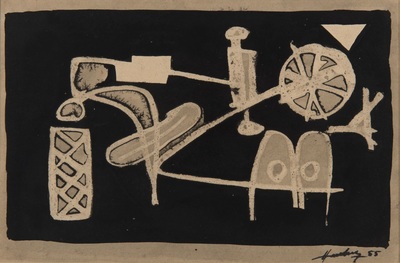 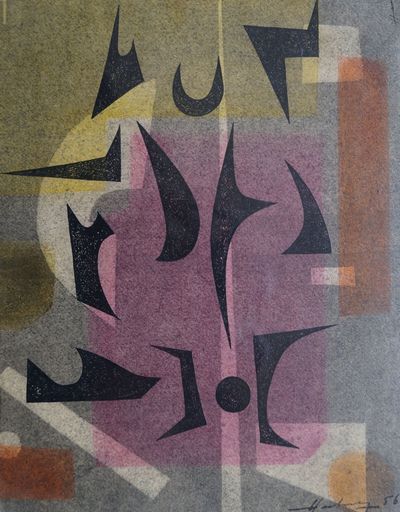 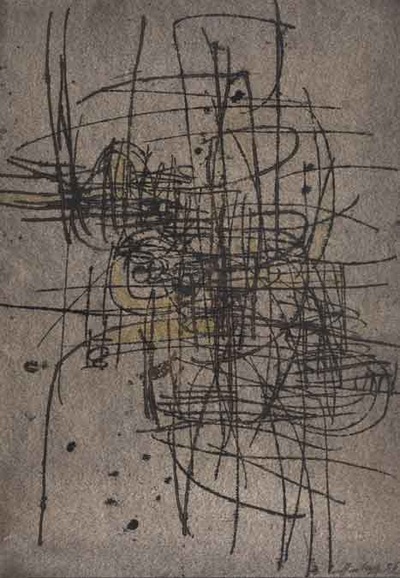 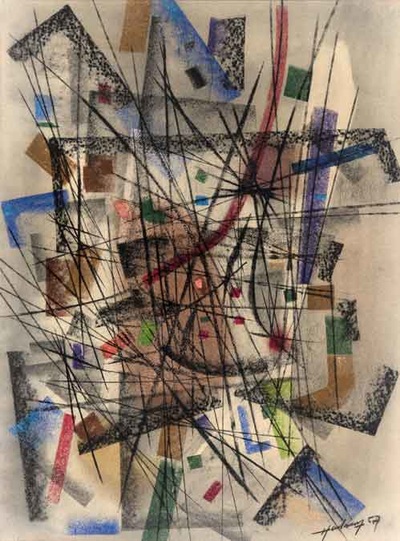 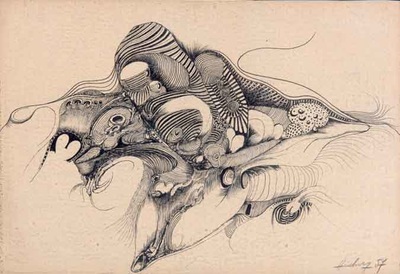 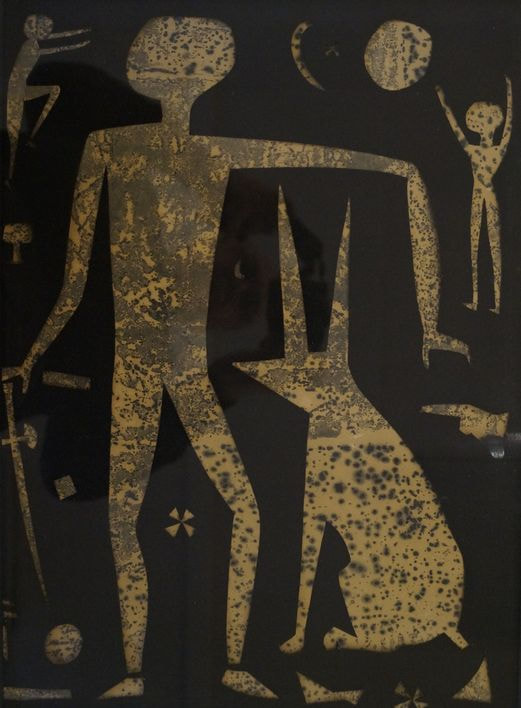 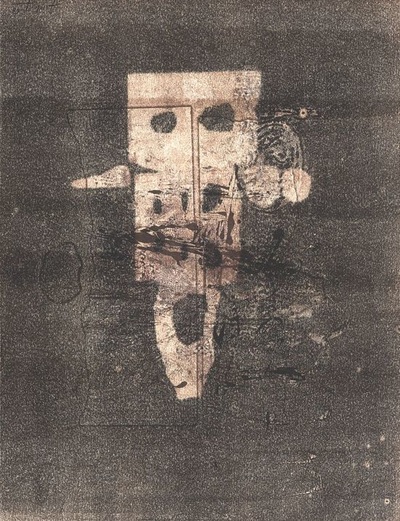 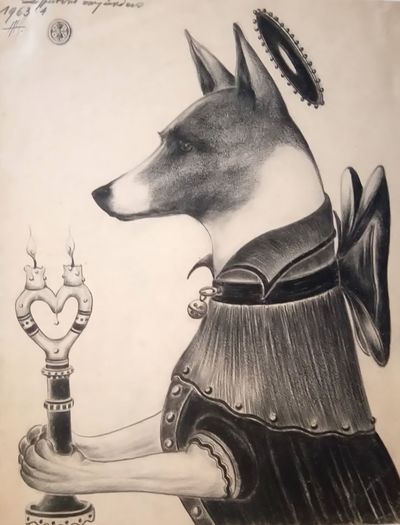 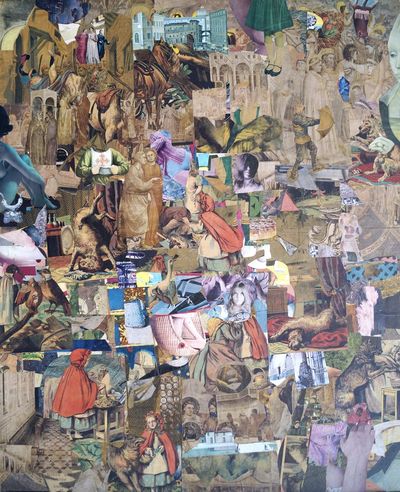 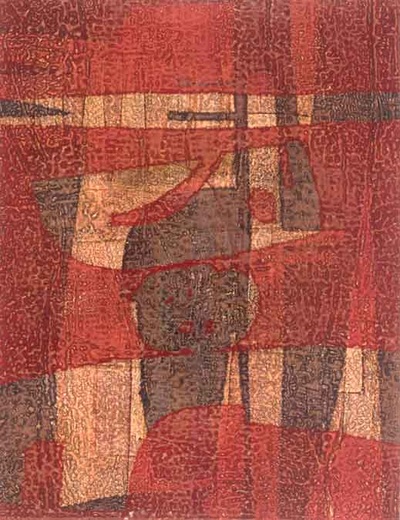 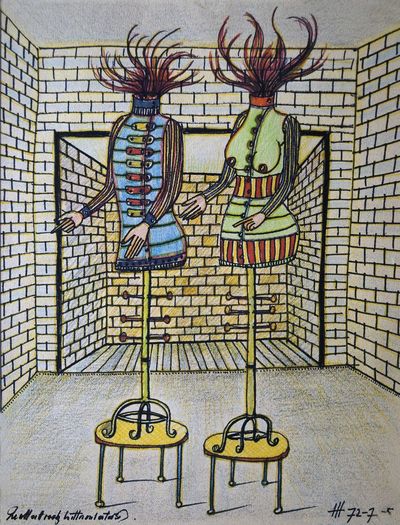 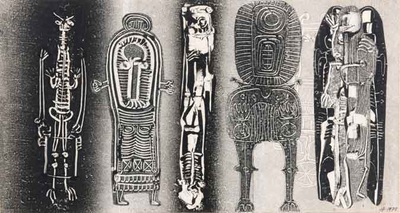 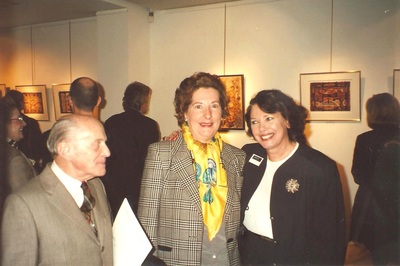 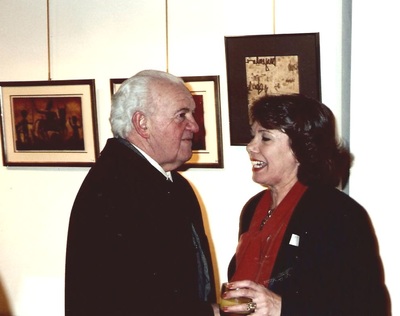 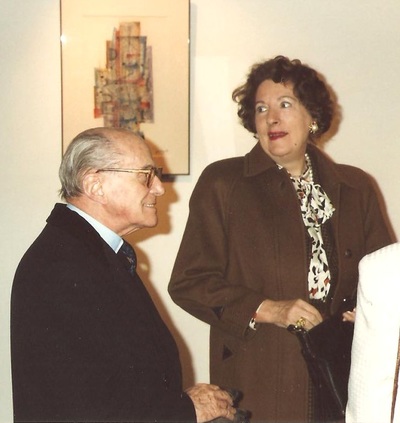 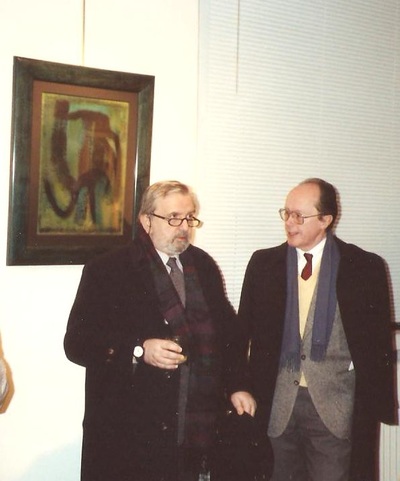 Heerbrant ( Brussels 1912 - 1982 ) was a self-made man, figurative and abstract at the same time, which was rather upsetting the art critics, since they were unable to “classify” his work. Heerbrant appears to be indebted to Paul Klee and was familiar with the work of Victor Brauner, whom he met in Paris. However, he followed his own path as an artist and created a world of his own.​ Daumier’s work incited him to turn his fellow-men, colleagues and politicians into ridicule by caricaturing their vices, German expressionists George Grosz and Otto Dix made him transform real portrait-studies by adding clownesque elements and change compositions by inclining and breaking the space into fragments, creating hereby a dynamic impression.
Heerbrant was very interested in ancient cultures, rituals, supernatural forces and ancestral cults. Egyptian, Greek and Roman mythology, Precolumbian and Maya art, Persian miniatures and African tribal sculpture were all sources of inspiration for his fantastic creatures and strange bestiary. Heerbrant was a communist at heart and lived up to his principles and ideals without accepting any compromise. Moreover, his cynical sense of humor turned him into a lonely man with few friends and plenty of enemies. Nevertheless, famous belgian collectors such as Bénédict Goldschmidt, Baron Bertie Urvater, Philippe Dotremont and Fernand Graindorge found the way to his atelier and discovered a great artist and a genuine alchimist, experimenting continuously with home-made colours, acids and varnishes, using all kinds of techniques and tools…They saw watercolours, gouaches and oils on paper, charcoal- and ink drawings, monotypes, lithographs, woodcuts and linoprints, shining copperplates and black carved slates, drypoints, aquatints, collages and totems. Henceforth, Heerbrant’s works traveled around the world in the company of great artists such as Paul Klee, Victor Brauner, Max Ernst etc.. He was invited several times to exhibit at the Biennials in Venice, Ljubljana, Sao Paulo and the US ( Pittsburgh, Dallas, New York, Cincinnati in 1965 ) and his works were commented by famous poets and even by the great Magritte himself, who compared him to Klee. The Royal Museum of Fine Arts of Belgium and the Carnegie Museum of Art in Pittsburgh have a fine collection of the artist's works.

Group 2 Gallery has organized several one-man shows of Heerbrant and published an illustrated monography about the artist in 1991. Works by Heerbrant are exhibited regularly at the Gallery both in group- and thematic exhibitions.
^ top